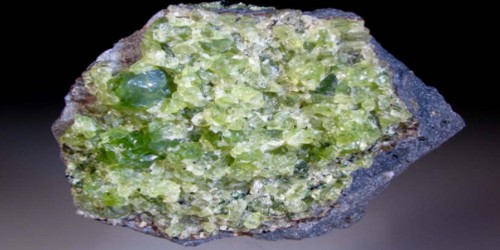 Forsterite was first described in 1824 for an occurrence at Mte. Somma, Vesuvius, Italy. It was named by Armand Lévy in 1824 after the English naturalist and mineral collector Adolarius Jacob Forster. Forsterite’s gemstone variety known as peridot, is one of the most mispronounced of gemstone names. The crystal structure displayed to the left is based on the fosterite-tephroite crystal structure refinement. It is associated with igneous and metamorphic rocks and has also been found in meteorites.

Forsterite-rich olivine is the most abundant mineral in the mantle above a depth of about 400 km (250 mi); pyroxenes are also important minerals in this upper part of the mantle.

Forsterite is being currently studied as a potential biomaterial for implants owing to its superior mechanical properties.