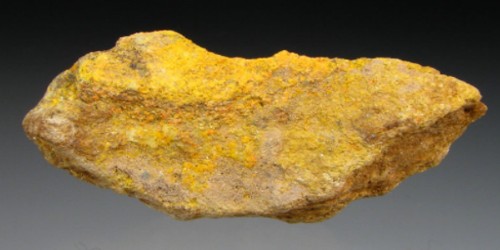 Fourmarierite is a secondary uranium-lead mineral. It was named for the Belgian geologist Paul Fourmarier (1877–1970). It is a mineral consisting of a hydrous oxide of lead and uranium. Its chemical formula is Pb(UO2)4O3(OH)4•4H2O.

Fourmarierite was named for Paul Formarier, former Belgian petrologist, and Professor of Geology at the University of Liege in Belgium. It is radioactive. Occurrence: A rare secondary mineral formed as an alteration product of uraninite in the oxide zone of uranium deposits; a common component of “gummite” replacing uraninite; may replace fossil wood.

Fourmarierite is uncommon but relatively abundant at its localities in the Democratic Republic of the Congo, Tanzania, Germany, Norway, Canada, the United States, and others. It occurs as “a rare secondary mineral formed as an alteration product of uraninite in the oxidized zone of uranium deposits, is a common component of ‘gummite replacing uraninite, and may replace fossil wood.”