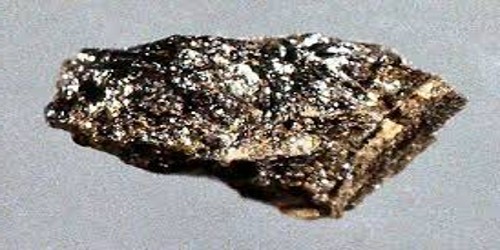 Franklinphilite is a phyllosilicate of the stilpnomelane group. It is a triclinic mineral containing aluminum, hydrogen, iron, magnesium, manganese, oxygen, potassium, silicon, sodium, and zinc. In 1938 C. Osborne Hutton described a manganoan member of stilpnomelane and incorrectly assumed it to be parsettensite. It was later described in 1984 by Pete J. Dunn, Donald R. Peacor and William B. Simmons as a Mn dominant stilpnomelane similar to parsettensite. Franklinphilite is dark brown to black and possesses a vitreous with a slightly resinous luster. It is brittle with a hardness of about 4 (Mohs) and cleaves imperfectly along the {001} plane. The density varies due to impurities but ranges from 2.6 to 2.8 g/cm3 compared to the calculated value of 2.66 g/cm3. It is translucent to nearly opaque, translucent in thin section and has a light brown streak.

Occurrence: In a veinlet crosscutting a breccia of calcite, aegirine, and serpentine in a metamorphosed stratiform zinc deposit.

Known from only two localities (with a third unconfirmed locality in Switzerland) It was found exclusively from the Franklin and Sterling Hill mines in Franklin, Sussex County, New Jersey, until 2013, when a locality in Wales was confirmed.