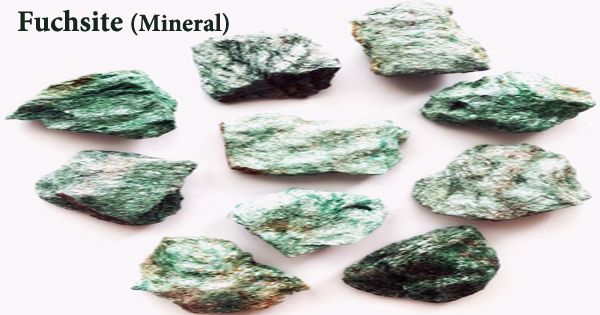 Fuchsite is a type of mica/Muscovite that crystallizes in the form of a plate such as layers, scales, masses, and tabular crystals, also known as chrome mica. It is a chromium (Cr) rich muscovite mineral type, belonging to the phyllosilicate mineral mica group, with the chemical formula K(Al,Cr)2(AlSi3O10)(OH)2. By having a variable amount of trivalent chromium replacing aluminum within the mineral, it varies from most other muscovites. The source of Fuchsite’s green color is chromium. It has a 2 to 2.5. hardness. The natural addition of Chromium to its genetic compound results in its green hue. It’s typically a very light green stone, but a medium to dark green can also be found.

With the replacement of a small amount of chromium for aluminum, muscovite starts to take on a very light green hue. In the shape of masses, scales, layered plates and even small tabular crystals, Fuchsite crystallizes. It is a fairly common mineral first discovered in the early 1800’s and named in honor of Johann Nepomuk von Fuchs, the famous German mineralogist. Trivalent chromium replaces one of the aluminium (Al) atoms creating the apple green hue characteristic of fuchsite in the general muscovite formula. As the quantity of chromium increases, when ample chromium is present, the green color becomes deeper and ranges to a rich emerald green.

Fuchsite can be found around the world, but certain countries are considered to have some of the most stunning parts we’ve ever seen, such as Brazil, South America, and India. Russia, the United States, Germany, Madagascar, and Switzerland are other popular localities. It is also discovered as a major component of chromium rich phyllitic or schistose metamorphic rocks of the Greenschist facies in minute micaceous aggregates (with individual plates barely visible). It occurs in most instances as small grains dispersed through the rock mass, but rocks made up almost entirely of fuchsite are often found.  These green fuchsite-rich rocks are known as “verdite.”

Traditionally, shamans and healers have used Fuchsite to discover the root causes of illness and to communicate with the elementals, fairies and devas of the earth. In particular on the lapidary market, it is one of the most widely misspelled minerals. With a long “u” and a long “i” it is sometimes spelled (and pronounced) “fuschite”. It also shows happiness, joy, miracles, and all the things that add to the warm and fuzzy feeling that we get when our heart chakra burns bright.

In order to create the gem known as green aventurine, small platelets of fuchsite or other green mica are often suspended in quartz. Depending on the degree of Cr substitution, the typical color of the mineral is pale green to emerald green. On the Mohs scale, the micaceous crystals are versatile and moderately sectile with a hardness of 2-2.5. It has become a very common gem material that is cut into cabochons, beads, and small sculptures and is usually inexpensive. Tumbled stones are also very common.

Under long-wave UV light, Fuchsite fluoresces lime green. Its radioactivity is barely measurable because of its potassium (K) content. Corundum crystals are rarely present in fuchsites. The substance is referred to as ruby in fuchsite because these corundum crystals are of a bright red hue. It’s a great thing to do to use Fuchsite while operating inside the device realms. It is a true stone of nature and encourages excellence when planting, landscaping or simply working with the property. It is a wonderful stone to get a deeper level of meditation, particularly when used in environments of the nature kind.

For the spirit, the Fuchsite crystal is like an espresso, sparking the fire that sparks the light of imagination. Due to the contrasting colors of the fuchsite and ruby, and because the corundum crystals frequently exhibit stunning hexagonal shapes when cut in slabs, cabochons, circles, and other artifacts, this material draws a lot of attention to rock, mineral, gem, and lapidary displays. Fuchsite is really a beautiful sparkling helper, willing to help with extra energy and/or become a link between the system and the human world.