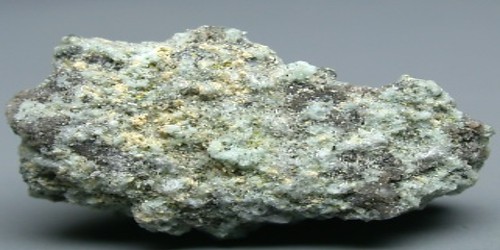 As a copper, iron sulfide, it is placed in the same group as bornite and chalcopyrite, and most fukuchilite locations are found in relatively close proximity to these minerals. Much relating to the structure of the mineral is still under debate, and some believe that fukuchilite might actually be a form of villamaninite (Cu, Ni, Co, Fe)S2, but fukuchilite currently still holds its mineral status as there is currently not enough evidence to discredit an already accepted and titled mineral. Fukuchilite was found to have a reflection color very similar to bornite and bright pinkish brown in the air, while being a purplish brown in oil. Also, it was found to have reactivity lower than pyrite, but distinctly higher than bornite. It has a Mohs hardness of 4-6, a specific gravity of 4.9, and a submetallic luster, composed of 11.1% iron, 37.9% copper, and 51.00% of sulfur.

Occurrence: In an ore body of gypsum–anhydrite, in interstices of small masses consisting of barite, covellite, and pyrite.

It occurs in ore bodies of gypsum-anhydrite at the intersection points of small masses of barite, covellite, gypsum, and pyrite, and is mostly found in the Hanawa mine in the Akita prefecture of Honshū, Japan where it was first discovered in 1969. It occurs in masses within the third geologic unit of the Kuroko type deposits within the mine.