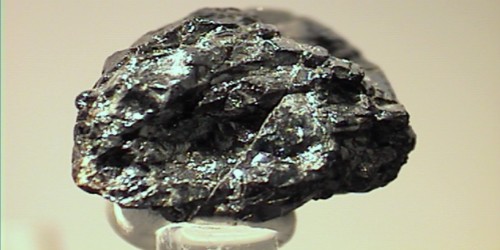 Gadolinite, sometimes known as ytterbite, is a silicate mineral consisting principally of the silicates of cerium, lanthanum, neodymium, yttrium, beryllium, and iron with the formula (Ce, La, Nd, Y)2FeBe2Si2O10. It is a rare dark brown or black mineral, consisting of a silicate of iron, beryllium, and rare earth.

It is called gadolinite-(Ce) or gadolinite-(Y), depending on the prominent composing element (Y if yttrium predominates, and Ce if cerium). It may contain 35.48% yttria sub-group rare earth, 2.17% ceria earth, as much as to 11.6% BeO, and traces of thorium. Gadolinite is fairly rare and typically occurs as well-formed crystals. It is nearly black in color and has a vitreous luster. The hardness is between 6.5 and 7 on the Mohs scale, and the specific gravity is between 4.0 and 4.7. It fractures in a conchoidal pattern and streaks grayish-green.

Gadolinite was named in 1800 for Johan Gadolin, the Finnish mineralogist-chemist who first isolated an oxide of the rare-earth element yttrium from the mineral in 1792. The rare earth gadolinium was also named for him. However, gadolinite does not contain more than trace amounts of gadolinium.

Gadolinite and euxenite are quite abundant and are future sources of yttrium subgroup rare earths. At present, these elements are recovered from monazite concentrates (after recovery of ceria sub-group metals).