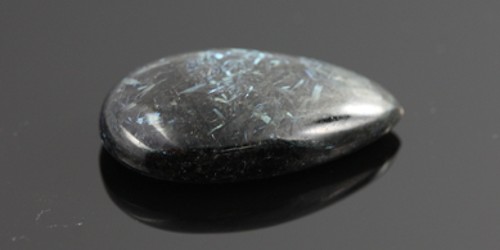 Gananite is a rare bismuth fluoride mineral form of bismuth trifluoride with a general formula of BiF3. It is an isometric-hextetrahedral gray mineral containing bismuth and fluorine. It is an isometric mineral, it does not exhibit double refraction. Moreover, this tells us that this mineral is not birefringent. Its color in Plane polarized light is blackish-brown, and it does not show pleochroism. It was first described in 1984 for an occurrence in the Laikeng Mining District, Gan County, Ganzhou Prefecture, Jiangxi Province, China. The name is given for its occurrence in the Southern Ganzhou (Gannan) region of China. In the Gannan occurrence, the only reported location, it occurs in quartz veins in association with wolframite, native bismuth, bismuthinite, pyrite, and chalcopyrite.

Despite the obscurity of Gananite and its very limited use, it is sometimes used in China as a bismuth ore. Bismuth is used mainly in chemicals like pharmaceuticals, cosmetics, and pigments. Bismuth is also used in creating alloys that have a characteristic low melting point which is used in electronic solders.