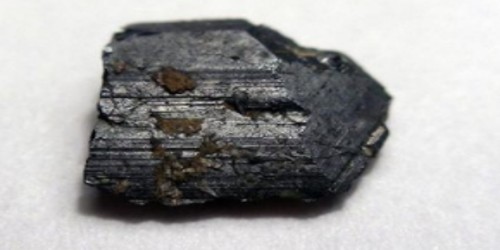 Geocronite is a mineral, a mixed sulfosalt containing lead, antimony, and arsenic with a formula of Pb14(Sb, As)6S23. It is a mineral consisting of a usually massive lead-gray lead antimony arsenic sulfide. It is not Radioactive. The mineral has been found in Spain, Ireland, and Sweden where it was first identified in 1839. Geocronite is the antimony-rich endmember of a solid solution series. The arsenic-rich endmember is named jordanite. It is a monoclinic-prismatic pure white mineral containing antimony, arsenic, lead, and sulfur.

Occurrence: In hydrothermal veins with sulfides and other sulfosalt minerals. It occurs as grey, black, to silvery white monoclinic crystals. It is found in hydrothermal veins usually associated with other similar minerals, particularly the sulfides of iron and copper.