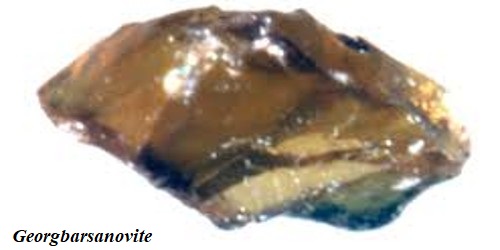 Georgbarsanovite is a very rare mineral of the eudialyte group, formerly known under the unaccepted name as barsanovite, with formula Na12(Mn, Sr, REE)3Ca6Fe32+Zr3NbSi(Si3O9)2(Si9O27)2O4Cl2•H2O. The original formula was extended to show the presence of cyclic silicate groups and domination of silicon at the M4 site. “REE”, standing for rare earth elements, are dominated by cerium. The mineral was found in nepheline pegmatite nearby Petrelius river, Khibiny massif, Kola Peninsula, Russia. It is named after Russian mineralogist Georg Baranov. Georgbarsanovite characterizes in the dominance of manganese at the N4 site. It also differs from most other accepted group representatives in its color.