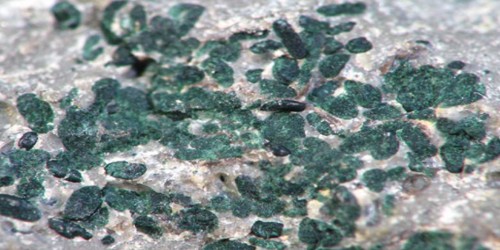 Glauconite is an iron potassium phyllosilicate (mica group) mineral of characteristic green color with very low weathering resistance and very friable. It is a greenish clay mineral of the illite group, found chiefly in marine sands. It has the chemical formula – (K, Na)(Fe3+, Al, Mg)2(Si, Al)4O10(OH)2. Its name is derived from the Greek glaucous (γλαυκος) meaning ‘blue’, referring to the common blue-green color of the mineral; its sheen (mica glimmer) and blue-green color presumably relating to the sea’s surface. It can be confused with chlorite (also of green color) or with a clay mineral. Its color ranges from olive green, black green to bluish green, and yellowish on exposed surfaces due to oxidation. In the Mohs scale, it has a hardness of 2. The relative specific gravity range is 2.4 – 2.95. It is normally found in dark green rounded brittle pellets, and with the dimension of a sand grain size.

These minerals Altered from detrital biotite or other parent materials, by marine diagenesis in shallow water under reducing conditions; especially in loosely consolidated sandstone (greensand), and impure limestone and siltstone.

Glauconite particles are one of the main components of greensand, glauconitic siltstone, and glauconitic sandstone. Glauconite has been called a marl in an old and broad sense of that word. Thus references to “greensand marl” sometimes refer specifically to glauconite. The Glauconitic Marl formation is named after it, and there is a Glauconitic Sandstone formation in the Mannville Group of Western Canada.