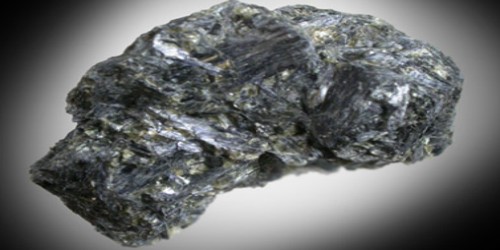 Glaucophane is the name of a mineral and a mineral group belonging to the sodic amphibole supergroup of the double chain inosilicates. Glaucophane is named for its typical blue color. Chemical formula ☐Na2(MgAl2)Si8O22(OH)2. It is a bluish sodium-containing mineral of the amphibole group, found chiefly in schists and other metamorphic rocks. Glaucophane crystallizes in the monoclinic system. The blue color is very diagnostic for this species. It is the magnesium-rich endmember and ferroglaucophane is the iron-rich endmember. Its hardness is 5–6 and its specific gravity is approximately 3–3.2.

This material has undergone intense pressure and moderate heat as it was subducted downward toward the mantle. Glaucophane is also found in eclogites that have undergone retrograde metamorphism.