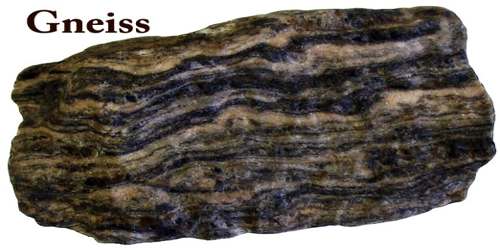 Gneiss (/ˈnaɪs/) is a globally common type of metamorphic rock that can easily be identified by its alternating layers of minerals known as gneissic banding. It is formed by high temperature and high-pressure metamorphic processes acting on formations composed of igneous or sedimentary rocks. Orthogneiss is gneiss derived from igneous rock (such as granite). Paragneiss is gneiss derived from sedimentary rock (such as sandstone).

Gneiss forms at higher temperatures and pressures than schist. Gneiss nearly always shows a banded texture characterized by alternating darker and lighter colored bands and without a distinct foliation. The word gneiss has been used in English since at least 1757.

Gneiss’s name is derived from gneist, the German word for spark or sparkle, because of the glittery appearance that many forms of gneiss exhibit. While not as widely recognized as granite or marble as a building material, gneiss can be used for many of the same applications, including countertops, gravestones, and flooring.

Gneiss usually is distinguished from schist by its foliation and schistosity; gneiss displays a well-developed foliation and a poorly developed schistosity and cleavage. For the casual student, it is convenient to think of a gneiss as a rock with parallel, somewhat irregular banding which has little tendency to split along planes. In contrast, schist typically is composed of platy minerals with a parallel to subparallel geometric orientation that gives the rock a tendency to split along planes; banding is usually not present. 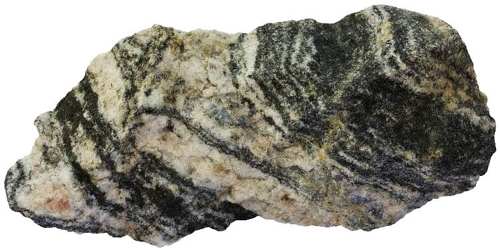 Gneiss is found in New England, the Piedmont, the Adirondacks, and the Rocky Mts. Gneissic rocks are usually medium to coarse-foliated; they are largely recrystallized but do not carry large quantities of micas, chlorite or other platy minerals. Gneisses that are metamorphosed igneous rocks or their equivalent are termed granite gneisses, diorite gneisses, etc. Gneiss rocks may also be named after a characteristic component such as garnet gneiss, biotite gneiss, albite gneiss, etc. Orthogneiss designates a gneiss derived from an igneous rock, and paragneiss is one from a sedimentary rock.

Gneiss is medium- to coarse-grained and may contain abundant quartz and feldspar, which some petrographers regard as essential components. The banding is usually due to the presence of differing proportions of minerals in the various bands; dark and light bands may alternate because of the separation of mafic (dark) and felsic (light) minerals. Banding can also be caused by differing grain sizes of the same minerals. The mineralogy of a particular gneiss is a result of the complex interaction of original rock composition, pressure and temperature of metamorphism, and the addition or loss of components.

Some specimens of gneiss contain distinctive minerals characteristic of the metamorphic environment. These minerals might include biotite, cordierite, sillimanite, kyanite, staurolite, andalusite, and garnet. Gneiss is sometimes named for these minerals, examples of which include “garnet gneiss” and “biotite gneiss.”

Gneiss is the principal rock over extensive metamorphic terrains. The banding may be oriented nearly parallel to the Earth’s surface (horizontal dip) or may have a steep dip. Such orientations can be interpreted in terms of the stresses that prevailed during the formation of the rock.

Gneiss can be classified on the basis of minerals that are present, presumed formational processes, chemical composition, or probable parent material. Orthogneiss is formed by the metamorphism of igneous rocks; paragneiss results from the metamorphism of sedimentary rocks. Pencil gneiss contains rod-shaped individual minerals or segregations of minerals, and augen gneiss contains stubby lenses of feldspar and quartz having the appearance of eyes scattered through the rock. The identification of gneiss as a product of metamorphism is usually clear, but some primary gneiss can be formed by the flow of a viscous, partially crystallized magma.

Augen Gneiss: Augen gneiss, from the German, ‘Augen’ (ˈaʊɡən), meaning “eyes”, is a coarse-grained gneiss resulting from metamorphism of granite, which contains characteristic elliptic or lenticular shear-bound feldspar porphyroclasts, normally microcline, within the layering of the quartz, biotite and magnetite bands.

Henderson Gneiss: Henderson gneiss is found in North Carolina and South Carolina, US, east of the Brevard Shear Zone. It has deformed into two sequential forms. The second, more warped, form is associated with the Brevard Fault, and the first deformation results from displacement to the southwest.

Lewisian Gneiss: Most of the Outer Hebrides of Scotland have a bedrock formed from Lewisian gneiss. In addition to the Outer Hebrides, they form basement deposits on the Scottish mainland west of the Moine Thrust and on the islands of Coll and Tiree. These rocks are largely igneous in origin, mixed with metamorphosed marble, quartzite and mica schist with later intrusions of basaltic dikes and granite magma.

All gneiss forms as a result of high-grade, regional metamorphic conditions. High grade means that the metamorphism occurs at high pressures and at temperatures at or above 320 degrees Celsius. Any water that is present in the minerals pre-metamorphism is frequently lost as the temperature increases, resulting in hard metamorphic rocks that are generally resistant to dissolution in water. Regional means that the metamorphic conditions occur over large geographic areas and include differential (or shearing) stresses, which help to form the layered structure known as foliation.

Gneiss rocks exhibit a unique form of foliation known as gneissic banding, which are thicker bands of foliation than most metamorphic rocks display. It is one of the features that helps differentiate gneiss from other foliated rocks. Mineralogically, gneiss tends to include quartz, feldspar, mica, chlorite, and other clay minerals. Some also contain larger crystals imbedded in the rock matrix, most frequently garnet, topaz, and beryl minerals.

Gneiss can form in several different ways. The most common path begins with shale, which is a sedimentary rock. Regional metamorphism can transform shale into slate, then phyllite, then schist, and finally into gneiss. During this transformation, clay particles in shale transform into micas and increase in size. Finally, the platy micas begin to recrystallize into granular minerals. The appearance of granular minerals is what marks the transition into gneiss.

Gneiss usually does not split along planes of weakness like most other metamorphic rocks. This allows contractors to use gneiss as a crushed stone in road construction, building site preparation, and landscaping projects.

Some gneiss is durable enough to perform well as a dimension stone. These rocks are sawn or sheared into blocks and slabs used in a variety of building, paving, and curbing projects.

Some gneiss accepts a bright polish and is attractive enough for use as an architectural stone. Beautiful floor tiles, facing stone, stair treads, window sills, countertops, and cemetery monuments are often made from polished gneiss.