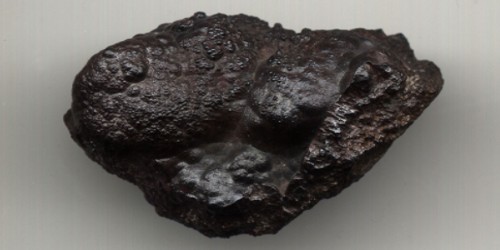 Goethite is an iron-bearing hydroxide mineral of the diaspore group. It is found in soil and other low-temperature environments. It is a dark or yellowish-brown mineral consisting of hydrated iron oxide, occurring typically as masses of fibrous crystals. It has been well known since ancient times for its use as a pigment (brown ochre). Evidence has been found for its use in paint pigment samples taken from the caves of Lascaux in France.

It was first described in 1806 based on samples found in the Hollertszug Mine in Herdorf, Germany. The mineral was named after the German polymath and poet Johann Wolfgang von Goethe (1749–1832). Goethite is an iron oxyhydroxide containing ferric iron. It is the main component of rust and bogs iron ore. Goethite’s hardness ranges from 5.0 to 5.5 on the Mohs Scale, and its specific gravity varies from 3.3 to 4.3. The mineral forms prismatic needle-like crystals (“needle iron ore”) but is more typically massive.

Goethite often forms through the weathering of other iron-rich minerals and thus is a common component of soils, concentrated in laterite soils. Significant deposits of goethite are found in England, Australia, Cuba, and Michigan, Minnesota, Missouri, Colorado, Alabama, Georgia, Virginia, and Tennessee, and Florida caves in the United States.

Its main modern use is as an iron ore, being referred to as brown iron ore. It does have some use as a clay earth pigment. Iron-rich lateritic soils that have developed over serpentinite rocks in tropical climates are mined for their iron content, as well as other metals.

Fine goethite specimens are rare and therefore are valued collectibles. Banded or iridescent varieties are cut and polished into cabochons for jewelry making.