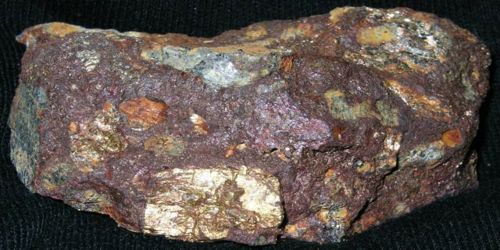 Gossan is intensely oxidized, weathered or decomposed rock, usually the upper and exposed part of an ore deposit or mineral vein. It is an iron-containing secondary deposit, largely consisting of oxides and typically yellowish or reddish, occurring above a deposit of a metallic ore. In the classic gossan or iron cap, all that remains is iron oxides and quartz often in the form of box works, quartz lined cavities retaining the shape of the dissolved ore minerals. They are a highly ferruginous rock which is the product of the oxidation by weathering and leaching of a sulfide body.

The name gossan appears to come from Cornish miner’s slang. The terms “iron cap” and “iron hat”, common in America, are direct translations from the German “eisenhut”, which term was also used in America. Gossan is an intensely oxidized, weathered, or decomposed rock that is found on the upper and exposed part of an ore deposit or mineral vein. When gossan is exposed to water and air at the surface, the minerals tend to oxidize and liberate their contents. The iron oxides in them include hematite and goethite.

Gossans form by the oxidation of the sulfide minerals in an ore deposit and they thus may be used as clues to the existence of subsurface ore deposits, especially if distinctive box works are present. Frequently gossan appears as a red stain against the background rock and soil due to the abundance of oxidized iron and the gossan may be a topographic positive area due to the abundance of erosion resistant quartz and iron oxides. Although most gossans are red, orange, or yellow, black gossans from manganese oxides such as pyrolusite, manganite, and especially psilomelane form at the oxidized portion of Manganese-rich mineral deposits.

In the 19th and 20th centuries, gossans were important guides to buried ore deposits used by prospectors in their quest for metal ores. An experienced prospector could read the clues in the structure of the gossans to determine the type of mineralization likely to be found below the iron cap.