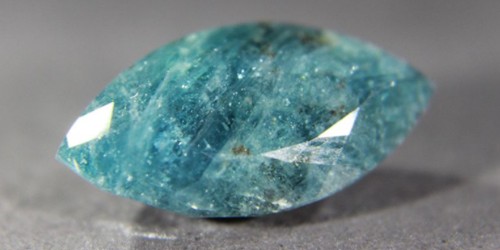 Grandidierite is an extremely rare mineral and a gem that was first discovered in 1902 in southern Madagascar. General formula: (Mg, Fe2+)Al3(BO3)(SiO4)O2. It is an orthorhombic-dipyramidal bluish green mineral containing aluminum, boron, iron, magnesium, oxygen, and silicon. The mineral was named in honor of French explorer Alfred Grandidier (1836–1912) who studied the natural history of Madagascar. Grandidierite is typically bluish-green in color and derives its distinctive color from traces of iron. It has a hardness of 7 to 7.5 on the Mohs scale, similar to garnet; a density of 2.85 to 3.00, in the approximate range of tourmaline; and a refractive index of 1.590-1.623. It forms in the orthorhombic crystal system.

In addition to Madagascar, it has been reported from New Zealand, Norway, Suriname, Algeria, Italy, Malawi, India, the United States, Canada, Antarctica, the Czech Republic, and other localities. Yet gem-quality grandidierite is extremely rare.