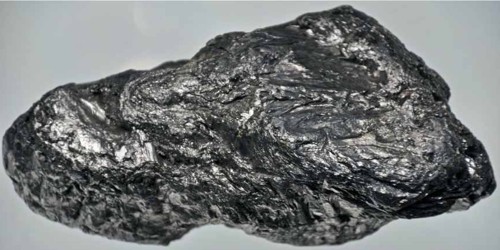 Graphite, archaically referred to as plumbago, is a crystalline allotrope of carbon, a semimetal, a native element mineral, and a form of coal. It is a grey crystalline allotropic form of carbon which occurs as a mineral in some rocks and can be made from coke. It is used as a solid lubricant, in pencils, and as a moderator in nuclear reactors.

Graphite is a mineral that forms when carbon is subjected to heat and pressure in Earth’s crust and in the upper mantle. Graphite has a layered, planar structure. The individual layers are called graphene. It is extremely soft, cleaves with very light pressure, and has a very low specific gravity. In contrast, it is extremely resistant to heat and nearly inert in contact with almost any other material. These extreme properties give it a wide range of uses in metallurgy and manufacturing.

Graphite occurs in metamorphic rocks as a result of the reduction of sedimentary carbon compounds during metamorphism. It also occurs in igneous rocks and in meteorites. Minerals associated with graphite include quartz, calcite, micas, and tourmaline. In meteorites, it occurs with troilite and silicate minerals. Small graphitic crystals in meteoritic iron are called cliftonite.