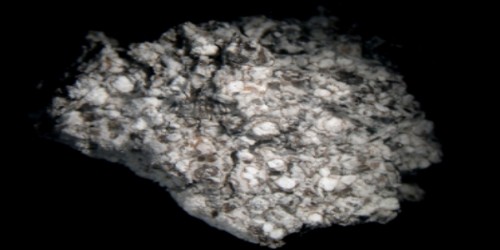 Gregoryite is an anhydrous carbonate mineral that is rich in potassium and sodium with the formula: [(Na2, K2, Ca)CO3]. It is a mineral containing calcium, carbon, oxygen, potassium, and sodium. It was named after Professor John Walter Gregory (associated with the University of Melbourne, Australia and the University of Glasgow, Scotland), and was discovered in 1980. It occurs associated with nyerereite, alabandite, halite, sylvite, fluorite, and calcite. Gregoryite is a rare mineral that can be identified in the field by its white color and the white streak. The density of this mineral is 2.27 gm/cm3. Because of its anhydrous nature, gregoryite reacts quickly with the environment, causing the dark lava to be converted to a white substance within hours.

Gregoryite occurs as phenocrysts in lengaite carbonatite lava. The only known locality of gregoryite is in Tanzania’s Oldoinyo Lengai volcano.