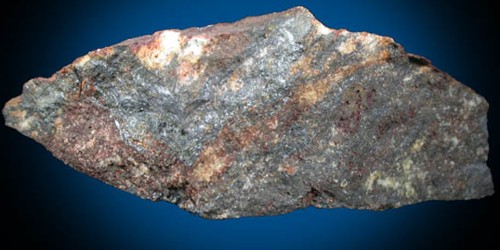 Greigite is an iron sulfide mineral with formula Fe3S4 (Iron(II, III) sulfide). It is the sulfur equivalent of the iron oxide magnetite (Fe3O4). It is a magnetic form of iron sulfide, analogous to magnetite, produced by microorganisms and found in lake sediments; Note: half the iron ions are ferrous and half ferric.

It was first described in 1964 for an occurrence in San Bernardino County, California, and named after the mineralogist and physical chemist Joseph W. Greig (1895–1977). It occurs in lacustrine sediments with clays, silts, and arkosic sand often in varved sulfide-rich clays. It is also found in hydrothermal veins. Greigite is formed by magnetotactic bacteria and sulfate-reducing bacteria. Greigite has also been identified in the sclerites of scaly-foot gastropods.

Common impurities include Cu, Ni, Zn, Mn, Cr, Sb and As. Ni impurities are of particular interest because the structural similarity between Ni-doped greigite and the (Fe, Ni)S clusters present in biological enzymes has led to suggestions that greigite minerals could have acted as catalysts for the origin of life. In particular, the cubic Fe4S4 unit of greigite is found in the Fe4S4 thiocubane units of proteins of relevance to the acetyl-CoA pathway.