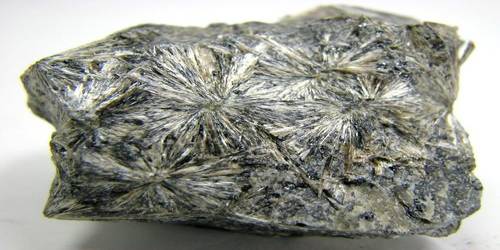 Grunerite is a mineral of the amphibole group of minerals with formula Fe7Si8O22(OH)2. It is the iron endmember of the grunerite-cummingtonite series. It is not Radioactive. It forms as fibrous, columnar or massive aggregates of crystals. The crystals are monoclinic prismatic. The luster is glassy to pearly with colors ranging from green, brown to dark grey. The Mohs hardness is 5 to 6 and the specific gravity is 3.4 to 3.5.

It was discovered in 1853 and named after Emmanuel-Louis Gruner (1809–1883), a Swiss-French chemist who first analyzed it. Amosite is a rare asbestiform variety of grunerite that was mined as asbestos predominantly in the eastern part of the Transvaal Province of South Africa. The origin of the name is Amosa, the acronym for the mining company “Asbestos Mines of South Africa”.

Occurrence: Common in medium- to high-grade metamorphosed iron formations. A product of contact metamorphism, and in some blueschist facies metaquartzites.

Distribution: Many localities. From Collobriµeres, Var, France. At Loch Duich, Ross-shire, and Glen Beag, Glenelg, Inverness-shire, Scotland. From the Botallack mine, St. Just, Cornwall, England. In Portugal, at Vila Real. At StrÄomshult, near Tunaberg, Sweden. Commercial production from the Penge area, Transvaal, South Africa. From around Michigamme, Marquette Co., Michigan, USA. In Canada, in the Labrador City area, Labrador, Newfoundland. At Gualilan, Argentina.