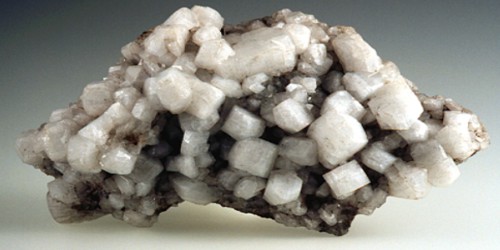 Harmotome is occasionally found with other zeolites like heulandite and stilbite in the typical zeolite occurrence inside of vesicles or bubbles of volcanic rocks. It forms vitreous white well defined monoclinic crystals, often associated with calcite and other zeolites. It has a Mohs hardness of 4 to 5 and a specific gravity of 2.44 to 2.5.

Occurrence: Of hydrothermal origin, in cavities in basalts, phonolites, trachytes; in gneisses, and in some ore veins. Harmotome has been reported from many localities in the Pacific basin, in some cases associated with phillipsite in pelagic clays.