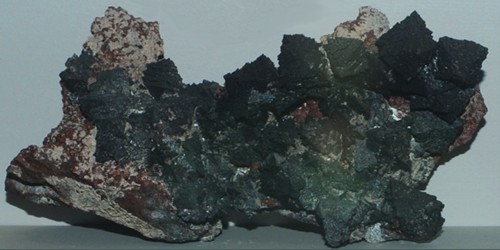 Hausmannite is a brown to a black metallic mineral with the Mohs hardness of 5.5 and a specific gravity of 4.8. It can have a bright metallic luster and form well-shaped crystals. It belongs to the spinel group and forms tetragonal crystals.

The type locality is Oehrenstock (Öhrenstock), Ilmenau, Thuringian Forest, Thuringia, Germany, where it was first described in 1813. Locations include Batesville, Arkansas, US; Ilfeld, Germany; Langban, Sweden; and the Ural Mountains, Russia. High-quality samples have been found in South Africa and Namibia where it is associated with other manganese oxides, pyrolusite and psilomelane and the iron-manganese mineral bixbyite.