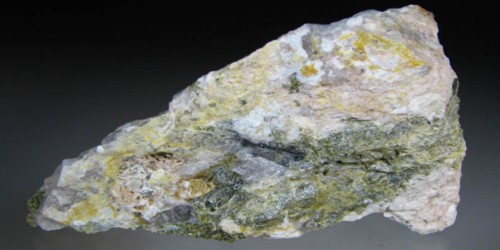 Hawleyite is a rare sulfide mineral in the sphalerite group, dimorphous and easily confused with greenockite. It was discovered in 1955 in the Hector-Calumet mine, Keno-Galena Hill area, Yukon Territory and named in honor of mineralogist James Edwin Hawley (1897–1965), a professor at Queen’s University in Ontario, Canada.

Chemically, it is a cadmium sulfide, and occurs as a bright yellow coating on sphalerite or siderite in vugs, deposited by meteoric waters. As Hawleyite is easily confused with greenockite, and they are fairly rare alteration product associated with fractures or indirect association with cadmium-rich Sphalerite or other cadmium-rich sulfides. It occurs as a fine, earthy, pulverulent bright orange to yellow coating.

Occurrence: As coatings on fine-grained sphalerite and siderite in vugs; probably of secondary origin, deposited from meteoric waters in vugs and along late fractures.

Hawleyite is a widespread but uncommon mineral and can be found in localities in Canada, the United States, the Czech Republic, Spain, Greece, Ireland, England, Russia, New Zealand, Chile, India, and others.