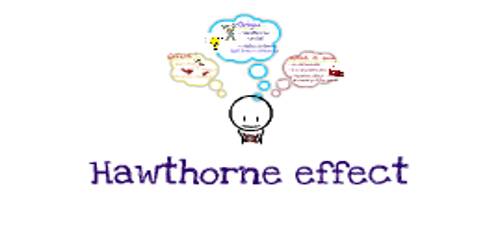 The Hawthorne Effect was first described by Henry A. Landsberger in 1950 who noticed a tendency for some people to work harder and perform better when they were being observed by researchers. It is a type of reactivity in which individuals modify an aspect of their behavior in response to their awareness of being observed. It is the process where human subjects of an experiment change their behavior, simply because they are being studied. This is one of the hardest inbuilt biases to eliminate or factor into the design.

The Hawthorne Effect is named after a series of social experiments on the influence of physical conditions on productivity at Western Electric’s factory at Hawthorne, Chicago in the 1920s and 30s.

The researchers changed a number of physical conditions over the course of the experiments including lighting, working hours and breaks. In all cases, employee productivity increased when a change was made. The researchers concluded that employees became motivated to work harder as a response to the attention being paid to them, rather than the actual physical changes themselves. The Hawthorne Effect studies suggest that employees will work harder if they know they’re being observed. While I don’t recommend hovering over your employees watching them all day, you could try providing regular feedback, letting your team know that you know what they’re up to and how they’re doing.

Showing your employees that you care about them and their working conditions may also motivate them to work harder. Encourage your team to give you feedback and suggestions about their workspace and development.

Many of the original findings of the Hawthorne studies have since been found to be either overstated or erroneous, but the term has become widely used in psychology, economics, business, and other areas. Despite this, the term is still often used to refer to changes in behavior that can result from taking part in an experiment.