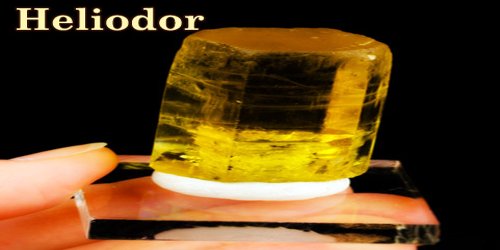 “Heliodor” is a form of beryl, and is actually the most brilliant form of all the beryls. Heliodor is a name used by mineralogists and gemologists for specimens of the mineral beryl with a yellow, greenish yellow or golden-yellow color.

Golden beryl can range in colors from pale yellow to a brilliant gold. Unlike emerald, golden beryl generally has very few flaws. The term “golden beryl” is sometimes synonymous with heliodor (from Greek hēlios – ἥλιος “sun” + dōron – δῶρον “gift”), They combine as “gift from the sun”, but golden beryl refers to pure yellow or golden yellow shades, while heliodor refers to the greenish-yellow shades. The golden yellow color is attributed to Fe3+ ions. Both golden beryl and heliodor are used as gems. Probably the largest cut golden beryl is the flawless 2054-carat stone on display in the Hall of Gems, Washington, D.C., United States.

Heliodor invokes the celestial Golden Ray of knowledge and learning, to stimulate the higher mind and enable the brain to function more efficiently. It is a stone of true nobility and selfless leadership and allows one to make decisions based on wisdom instead of emotion or reaction.

Occurrence and Properties of Heliodor –

Heliodor was first discovered in 1910 in Erongo, West Namibia. It is also produced in Russia, Ukraine, Sri Lanka, Zimbabwe, Nigeria, Namibia, Brazil, Afghanistan, Pakistan, and Madagascar. In the United States, heliodor can be found in Litchfield County, Connecticut. The best specimens of the stone come from Namibia, but some can also be found in Madagascar and Brazil. Brazilian heliodor is often of a pale yellow shade and is step-cut to give the stone more depth of color. Heliodor from Madagascar is of a finer, brighter color. 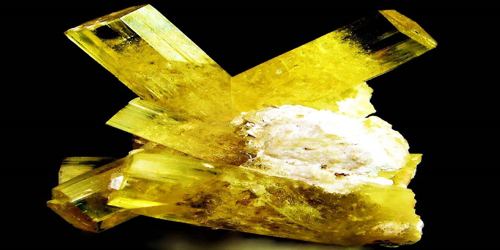 Heliodor in fact, has always been linked with the sun. Initially, only golden beryl found in Namibia was called heliodor, but today the name is applied almost indiscriminately to all the different varieties of yellow and gold beryl. Technically, however, the name should only apply to heliodor. What makes heliodor different than other yellow shades of beryl, is that it gets its vibrant color from trace iron impurities.

Heliodor with good clarity and a rich yellow, yellow-green or golden-yellow color can often be cut into attractive gemstones. Its Mohs hardness of 7.5 to 8 enables it to stand up well to abrasion. It is a suitable gemstone for rings, pendants, pins, earrings, bracelets, and almost any other jewelry use. It is a brittle, vitreous, and transparent to translucent stone. The main characteristic of heliodor is its color, sometimes described as similar to the yellow-green of olive oil. Its yellow shade may vary considerably, so it’s difficult to establish a dividing line between heliodor and golden beryl.

Heliodor most commonly occurs as an accessory mineral in granites, and is usually found in cavities and in granite pegmatites. Heliodor crystals in some pegmatites grow to extremely large sizes, sometimes even up to 30 feet. The stone is often found associated with aquamarine. Heliodor is famous for its perfect golden crystals and is commonly associated with quartz feldspars and muscovite mica.

Uses and Benefits of Heliodor –

Some benefits of Heliodor gemstone:

It bestows the individual with knowledge, grace and divine wisdom.

Just like other Gemstones of the Beryl Family like Emerald and Aquamarine, heliodor has strong protection powers and protects against evil eye, hexing, jealously etc.

It makes an individual very objective and helps in correct decision making based on factual judgment rather than by emotions.

It improves the cogency of thought and also blesses with good communication abilities.

It has the power of “MALE YANG ENERGY” and gives the wearer a lot of self confidence and assertiveness, if the person is timid.

It removes toxins of the intestines and stomach and bestows with robust health.

It has also shown improvements in conditions of the liver, spleen, pancreas and heart.

The Heliodor enables a person to actually own one’s power. It is a stone that fosters a genuine wisdom in the wearer that inspires pragmatic and better decision making. It also clears up the backlog of past emotional baggage.

It is the Gemstone of Hope. It removes the feeling of despair and empowers the individual to refocus and take charge. It also helps with the financial situation

It is used by many as a meditation crystal as well as a divination crystal has it heightens the power of intuition.

This gemstone is associated with hope, it has marvelous healing abilities that can elevate as well as enhance a person’s positive traits ensuring their will is that of true positivity and immense good faith.

It is believed that if this gemstone is placed where one resides, it automatically cleanses its environment and fills it with unimaginable positive energy, providing optimism as well as stability to ones living space.

Heliodor is recommended to be worn if you need a boost in confidence, mental stability, happiness or to increase positive energy.

Individuals suffering from different ailments or diseases are also advised to wear this gemstone as it possesses a divine ability to ease pains and aches while it strengthens one’s immune system.

Heliodor may stimulate both the Crown and Solar Plexus Chakras, connecting wisdom with spirituality, and stimulating activity, adaptability, and vitality. This connection to the crown allows for the personal identification with the Infinite and provides peace and oneness with God.