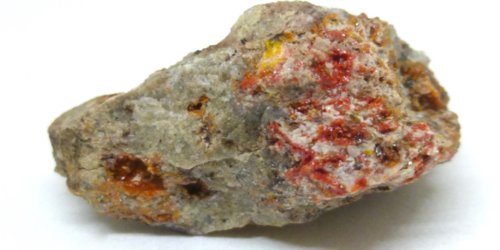 Hemihedrite is a rare lead-zinc chromate silicate mineral with formula Pb10Zn(CrO4)6(SiO4)2(F, OH)2. It forms a series with the copper analogue iranite. It was named in reference to the mineral’s hemihedral morphology as exhibiting only half the faces required for complete crystallographic symmetry.

Hemihedrite was first described in 1967 for occurrences in the Florence lead-silver mine in the Ripsey District, Tortilla Mountains, Pinal County, Arizona, US. Hemihedrite forms from the oxidation of galena, sphalerite, and pyrite in hydrothermal lead-bearing veins. It was named for the hemihedral morphology of its crystals.

Hemihedrite is a rare mineral that can be found only in localities in the United States in Arizona and Nevada, and an additional locality in the Esfahan Province of Iran.

It occurs in oxidized veins containing galena, sphalerite, and pyrite. Associated secondary minerals include cerussite, phoenicochroite, vauquelinite, willemite, wulfenite, galena, sphalerite, pyrite, tennantite, and chalcopyrite. It has been reported from several mining districts in Arizona and one in Nevada. It has also been reported from the Antofagasta Region of Chile and the Anarak District of Esfahan Province, Iran.