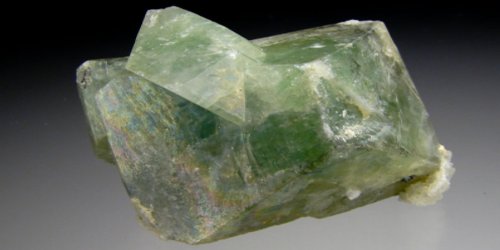 Herderite is a phosphate mineral belonging to the apatite, phosphate group, with formula CaBe(PO4)(F,OH). It is a mineral consisting of phosphate and fluoride of beryllium and calcium. It is a calcium beryllium phosphate and can be colorless, pale yellow, brown or grey/lavender. It forms good crystals and can have a nice yellow or light blue color.

It was first described in 1828 as an occurrence in the Sauberg Mine, Erzgebirge, Saxony, Germany. It was named for Saxon mining official Sigmund August Wolfgang von Herder (1776–1838). It forms monoclinic crystals, often twinned and variable in color from colorless through yellow to green. It forms a series with the more common hydroxylherderite, which has more hydroxyl ion than fluoride.

Herderite is difficult, if not nearly impossible to distinguish from its hydroxyl-dominant analog hydroxylherderite. It is found in many parts of the world, often in pegmatites and associated with other apatite minerals. It was first described in 1828 as an occurrence in the Sauberg Mine, Erzgebirge, Saxony, Germany. While found originally in Germany, the analysis of this initial material is suspect and additional material from the locality is now unavailable.