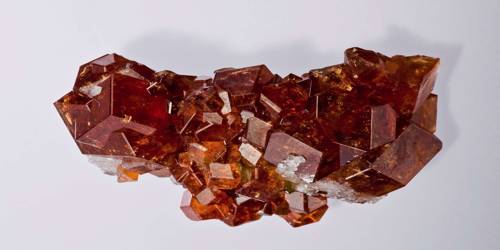 Hessonite or “cinnamon stone” is a common variety of grossular with the general formula: Ca3Al2Si3O12. It is a calcium aluminum silicate. The name comes from the Ancient Greek: ἣσσων (hēssōn), meaning inferior; an allusion to its lower hardness and lower density than most other garnet species varieties. It is an orangish brown version of grossular garnet that is also known as ‘cinnamon stone’ because of its color.

It has a characteristic red color, inclining to orange or yellow, much like that of zircon. It was shown many years ago, by Sir Arthur Herbert Church, that many gemstones, especially engraved gems (commonly regarded as zircon), were actually hessonite. The difference is readily detected by the specific gravity, that of hessonite being 3.64 to 3.69, while that of zircon is about 4.6. Hessonite has a similar hardness to that of quartz (being about 7 on the Mohs scale), while the hardness of most garnet species is nearer 7.5.

Hessonite comes chiefly from Sri Lanka and India, where it is found generally in placer deposits, though its occurrence in its native matrix is not unknown. It is also found in Brazil and California.

Hessonite has been prized for thousands of years. The ancient Greeks and Romans used the stone in jewelry, and for cameo and intaglio pieces.