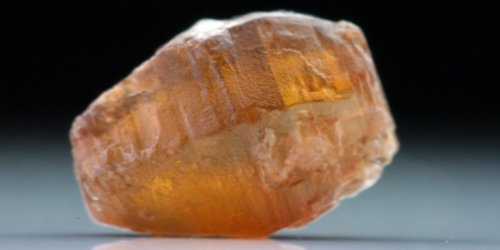 Hibonite [(Ca, Ce)(Al, Ti, Mg)12O19] is a very rare gem. It is a calcium aluminate mineral found in carbonaceous chondrite meteorites. Stones which are large enough or transparent enough for faceting are very sparse. It is named after Paul Hibon, a French prospector who discovered the mineral in Madagascar.

A very rare gem, Hibonite was discovered in Madagascar by Paul Hibon, a French prospector. It is slightly radioactive. Hibonite is a brownish black mineral with a hardness of 7.5-8.0 and a hexagonal crystal structure. It is rare but is found in high-grade metamorphic rocks on Madagascar. Some presolar grains in primitive meteorites consist of hibonite.

Occurrence: In metamorphosed limestone, pyroxenite, gneiss, and granulite of the amphibolites to granulite facies; also alluvial. A common accessory in Ca-Al-rich inclusions in some carbonaceous chondrites.

Hibonite also is a common mineral in the Ca-Al-rich inclusions (CAIs) found in some chondritic meteorites. It is closely related to hibonite-Fe (IMA 2009-027, ((Fe, Mg)Al12O19)) an alteration mineral from the Allende meteorite.