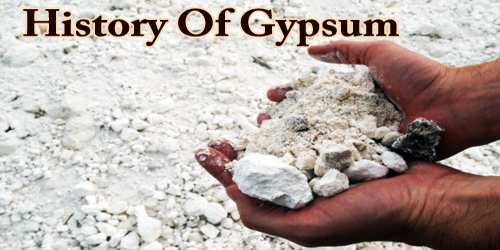 The word gypsum is derived from the Greek word γύψος (gypsos), “plaster”. Because the quarries of the Montmartre district of Paris have long furnished burnt gypsum (calcined gypsum) used for various purposes, this dehydrated gypsum became known as plaster of Paris. Upon addition of water, after a few tens of minutes plaster of Paris becomes regular gypsum (dihydrate) again, causing the material to harden or “set” in ways that are useful for casting and construction.

Gypsum was known in Old English as spærstān, “spear stone”, referring to its crystalline projections. (Thus, the word spar in mineralogy is by way of comparison to gypsum, referring to any non-ore mineral or crystal that forms in spearlike projections). In the mid-18th century, the German clergyman and agriculturalist Johann Friderich Mayer investigated and publicized gypsum’s use as a fertilizer. Gypsum may act as a source of sulfur for plant growth, and in the early 19th century, it was regarded as an almost miraculous fertilizer. American farmers were so anxious to acquire it that a lively smuggling trade with Nova Scotia evolved, resulting in the so-called “Plaster War” of 1820. In the 19th century, it was also known as lime sulfate or sulfate of lime.

The Egyptians knew about it, and used it in the Pyramids. It’s also found in toothpaste; helps make peanuts grow; is found in the walls of our home; and makes many sets for movies.

Even though more than 15 million tons of gypsum are used in the United States in a typical year, and even though the average person is surrounded by gypsum products from dawn to dusk, from the cradle to the grave, most people today are apt to say “Now, just what is this stuff?” And this, despite the fact that the “stuff’ has been known to man for thousands of years.

However, the usual presence of darker impurities produces rock in varying shades of gray, brown, and even black. Since it normally is found close to the surface, gypsum can be mined or quarried easily.

Gypsum is found in a number of forms and is of great economic importance. It is colorless or white but can be tinted light brown, gray, yellow, green, or orange due to the presence of impurities. Single, well-developed crystals can be blocky with a slanted parallelogram outline, tabular, or bladed. Twinned crystals are common and frequently form characteristic “fishtails.” Numerous transparent, swordlike selenite gypsum crystals 61 ⁄2 ft (2 m) or more long can be found at the Cave of Swords, Chihuahua, Mexico, one of the world’s most spectacular mineral deposits. Gypsum occurs in extensive beds formed by the evaporation of ocean brine. It also occurs as an alteration product of sulfides in ore deposits and as volcanic deposits.