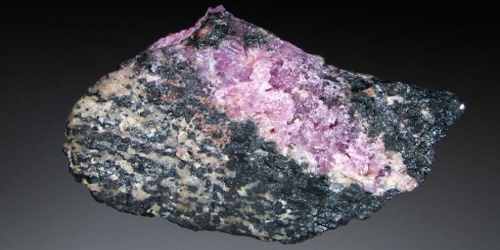 Hodgkinsonite was discovered in 1913 by H. H. Hodgkinson, for whom it is named in Franklin, New Jersey, and it is only found in that area. Hodgkinsonite is a very attractive mineral and has even been cut as a gemstone. It has a bright pink to lavender color that is similar to rhodonite but not quite as red. It crystallizes in the monoclinic system and typically forms radiating to acicular prismatic crystals with variable color from pink, yellow-red to deep red.

Hodgkinsonite is a rare mineral that occurs only at its type locality as seams in the massive willemite-franklinite ore in the metamorphosed stratiform zinc deposit.

It is most known for its association with snow-white barite crystals in veins that cut through the ores composed of willemite and franklinite. It has even been associated with native copper.