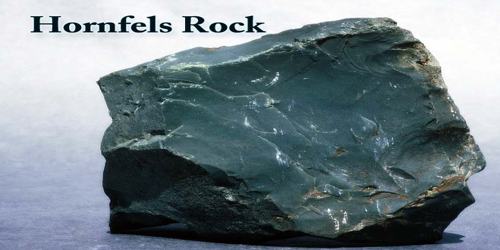 Hornfels is a fine-grained metamorphic rock that was formed by the contact between mudstone/shale, or other clay-rich rock, and a hot igneous body, and represents a heat-altered equivalent of the original rock. It is the group name for a set of contact metamorphic rocks that have been baked and hardened by the heat of intrusive igneous masses and have been rendered massive, hard, splintery, and in some cases exceedingly tough and durable. These properties are due to fine-grained non-aligned crystals with platy or prismatic habits. The term is derived from the German word Hornfels, meaning “hornstone”, because of its exceptional toughness and texture both reminiscent of animal horns. These rocks were referred to by miners in northern England as whetstones.

Hornfels was “baked” by heat conducted from a nearby magma chamber, sill, dike, or lava flow. Common temperatures for the formation of hornfels range from about 1300 to 1450 degrees Fahrenheit (700 to 800 degrees Celsius). Because directed pressure does not play a significant role in the formation of hornfels, it is often made up of mineral grains that are equidimensional in shape and without a preferred orientation. The grain shape and orientation might also be inherited from its parent rock.

Most hornfels are fine-grained, and while the original rocks (such as sandstone, shale, slate, and limestone) may have been more or less fissile owing to the presence of bedding or cleavage planes, this structure is effaced or rendered inoperative in the hornfels. Though they may show banding, due to bedding, etc., they break across this as readily as along it; in fact, they tend to separate into cubical fragments rather than into thin plates.

The name “hornfels” is assigned to rock after considering its grain size, texture, and geologic history. As a result, hornfels does not have a specific chemical or mineralogical composition. It inherits its composition from the rocks that are metamorphosed plus the fluids involved in the metamorphic process. Interpreting composition, grain size, texture, and geologic history can make hornfels a very difficult rock to identify.

The most common hornfels (the biotite hornfels) are dark-brown to black with a somewhat velvety luster owing to the abundance of small crystals of shining black mica. The lime hornfels are often white, yellow, pale green, brown and other colors. Green and dark-green are the prevalent tints of the hornfels produced by the alteration of igneous rocks. Although for the most part the constituent grains are too small to be determined by the unaided eye, there are often larger crystals of cordierite, garnet or andalusite scattered through the fine matrix, and these may become very prominent on the weathered faces of the rock. 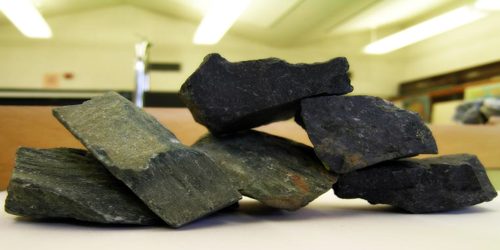 Some Interesting Facts of Hornfels Rock –

Occurrences and Structures of Hornfels –

Hornfels occurs worldwide. In Europe, the largest reserves are in the United Kingdom. In North America, hornfels occurs in primarily in Canada. South American countries with large reserves include Bolivia, Brazil, Ecuador, and Colombia. Asian reserves are found in China, Russia, India, North Korea, South Korea, and Thailand. In Africa, hornfels is found in Tanzania, Cameroon, East Africa, and Western Africa. The rock is found in Australia and New Zealand, as well.

The structure of the hornfels is very characteristic. Very rarely do any of the minerals show crystalline form, but the small grains fit closely together like the fragments of a mosaic; they are usually of nearly equal dimensions. This has been called pflaster or pavement structure from the resemblance to rough pavement work. Each mineral may also enclose particles of the others; in the quartz, for example, small crystals of graphite, biotite, iron oxides, sillimanite or feldspar may appear in great numbers. Often the whole of the grains are rendered semi-opaque in this way. The minutest crystals may show traces of crystalline outlines; undoubtedly they are of new formation and have originated in situ. This leads us to believe that the whole rock has been recrystallized at a high temperature and in the solid state so that there was little freedom for the mineral molecules to build up well-individualized crystals. The regeneration of the rock has been sufficient to efface most of the original structures and to replace the former minerals more-or-less completely by new ones. But crystallization has been hampered by the solid condition of the mass and the new minerals are formless and have been unable to reject impurities, but have grown around them.

Hornfels is not a rock that is “deposited”. Instead it is a rock type that forms when an existing rock is metamorphosed. The original rock that was metamorphosed is usually referred to as the “parent rock” or “protolith”. 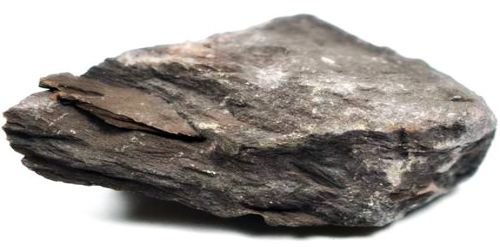 Key properties of the Hornfels Rock include velvety texture and appearance, conchoidal fracture, and fine grain. It may be very hard and tough. It is a contact metamorphic rock, formed when magma bakes its source material.

It is a type of metamorphic rock that gets its name from its resemblance to animal horn. It forms when magma heats other rock, which may be igneous, metamorphic, or sedimentary.

The most common colors of hornfels are black and dark brown. It may be banded or occur in other colors. The colors depend on the composition of the original rock.

Formation of the Hornfels –

The Hornfels formed is a is a group designated for a series of contact metamorphism that have been baked and by the heat of magma chamber or from the intrusive igneous masses and are made into massive, hard, splintery, and in some cases exceedingly tough and durable. As of the contact metamorphism, pressure is not a factor in the formation of hornfels, it lacks the foliation as seen in many metamorphic rocks formed under high pressure and temperature. Pre-existing bedding and structure of the parent rock is generally destroyed in hornfels.

On the basis of mineral composition, most occurrences of hornfels can be separated into one of three general groups:

Hornfels have the ability to resonate when struck. Michael Tellinger had described these stones in South Africa also known as “ring-stones” due to their ability to ring like a bell. The Musical Stones of Skiddaw are an example of a lithophone made from hornfels.

The primary use of hornfels is in architecture. The hard, interesting-looking stone may be used to make interior flooring and decorations as well as exterior facing, paving, curbing, and decorations.

The rock is also used in the construction industry to make road aggregate. Historically, hornels has been used to construct monuments, cemetery markers, whetstones, artworks, and artifacts.