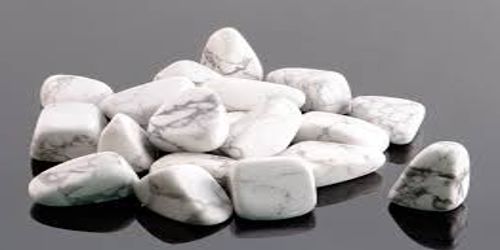 Howlite, a calcium borosilicate hydroxide [Ca2B5SiO9(OH)5], is a borate mineral found in evaporite deposits. It is a mineral consisting of a white nodular or earthy calcium borosilicate. It is naturally white with fine grey marbling but can be dyed other colors to add a level of color therapy to its attributes. Howlite was discovered near Windsor, Nova Scotia in 1868 by Henry How (1828–1879), a Canadian chemist, geologist, and mineralogist.

Howlite is a lovely stone to use when needing to reduce anxiety, tensions, and stress. It can be used to facilitate awareness, encourage emotional expression and assist in the elimination of pain, stress and/or rage. The most common form of howlite is irregular nodules, sometimes resembling cauliflower. Crystals of howlite are rare, having been found in only a couple of localities worldwide. Crystals were first reported from Tick Canyon in the Sierra Pelona Mountains of California, and later at Iona, Nova Scotia. Crystals reach a maximum size of about one centimeter. The crystals at Iona are colorless, white or brown and are often translucent or transparent.