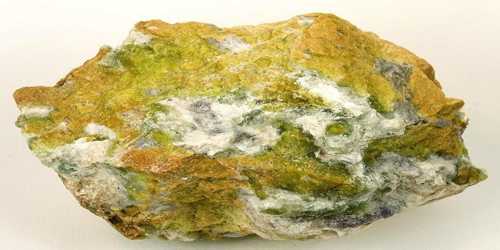 Hydrotalcite is a layered double hydroxide of general formula Mg6Al2CO3(OH)16·4(H2O), whose name is derived from its resemblance with talc and its high water content. It is a pearly-white mineral, consisting of hydrous aluminum and magnesium hydroxide and carbonate. It is a trigonal-hexagonal scalenohedral mineral containing aluminum, carbon, hydrogen, magnesium, and oxygen. The layers of the structure stack in multiple ways, to produce a 3-layer rhombohedral structure (3R Polytype), or a 2-layer hexagonal structure (2H polytype) formerly known as manasseite. The two polytypes are often intergrown. The carbonate anions that lie between the structural layers are weakly bound, so hydrotalcite has anion exchange capabilities.

It was first described in 1842 for an occurrence in a serpentine – magnesite deposit in Snarum, Modum, Buskerud, Norway. It occurs as an alteration mineral in serpentinite in association with serpentine, dolomite and hematite.