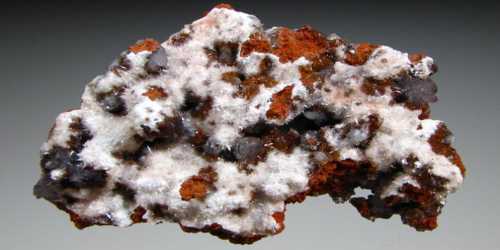 Hydrozincite, also known as zinc bloom or marionette, is a white carbonate mineral consisting of Zn5(CO3)2(OH)6. It is usually found in massive rather than crystalline form. It is usually an accessory mineral, forming as masses and crusts on top of other minerals. It was named for its chemical components of water (hydro) and zinc.

Localities for good specimens of Hydrozincite include in Austria, Italy, Spain, the United States, Mexico, Iran, Australia, and Bulgaria. It was first described in 1853 for an occurrence in Bad Bleiberg, Carinthia, Austria and named for its chemical content. Hydrozincite is a widespread and common mineral that can be found in oxidized zinc deposits, typically at the expense of sphalerite and smithsonite, and can also be found in mine workings and caves as incrustations. It will fluoresce pale blue to lilac under ultraviolet light.

Occurrence: Uncommonly formed in the oxidized portions of zinc-bearing deposits, at the expense of sphalerite or smithsonite, and as incrustations in mine workings and caves. It occurs as an oxidation product of zinc ores and as post mine incrustations. It occurs associated with smithsonite, hemimorphite, willemite, cerussite, aurichalcite, calcite, and limonite.

Hydrozincite may be present on many specimens, but is usually unnoticed or assumed to be some other more common mineral, such as calcite or aragonite.