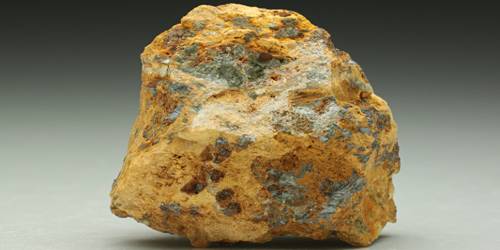 Ianbruceite is a rare hydrated zinc arsenate with the formula [Zn2(OH)(H2O)(AsO4)](H2O)2; material from the Driggith mine has traces of cobalt. It was first discovered at Tsumeb, approved by the International Mineralogical Association as a new mineral species in 2011, and named for Ian Bruce, who founded “Crystal Classics” in the early 1990s and was heavily involved in attempts to reopen the famous Tsumeb mine for specimen mining.

In 2013 new occurrences of ianbruceite were reported from the neighboring Driggith and Potts Gill mines on High Pike in the Caldbeck Fells, Cumbria, England. Here the mineral is probably a post-mining product. Crystals of ianbruceite are flexible and deform plastically. The mineral is very soft, with Mohs hardness only 1, the same as talc. Measurements of the specific gravity have not been reported, but from the formula and the cell dimensions, it has been calculated as 3.197. It also readily absorbs alcohol.

The type locality is the Tsumeb Mine, Otjikoto Region, Namibia.

In Namibia, ianbruceite has been found in the zinc pocket at the 44 Level, Tsumeb Mine, as sky blue to very pale blue platy crystals associated with leiteite, köttigite, legrandite, and adamite. It occurs as thin platy crystals up to 80 μm long and a few μm thick, which form flattened aggregates up to 0.10 mm across, and ellipsoidal aggregates up to 0.5 mm across, associated with coarse white leiteite, dark blue köttigite, minor legrandite, and adamite.