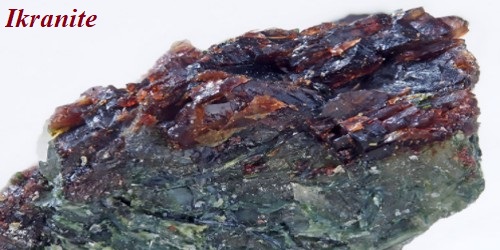 Ikranite is a member of the eudialyte group, named after the Shubinov Institute of Crystallography of the Russian Academy of Sciences. Formula – (Na,H3O)15(Ca,Mn,REE)6Fe23+ Zr3([ ],Zr)([ ],Si)Si24O66(O,OH)6Cl2-3H2O. It is a trigonal-ditrigonal pyramidal brownish yellow mineral containing calcium, cerium, chlorine, fluorine, hafnium, hydrogen, iron, lanthanum, manganese, neodymium, niobium, oxygen, potassium, silicon, sodium, strontium, titanium, and zirconium. It is a cyclosilicate mineral that shows trigonal symmetry with the space group R3m, and is often seen with a pseudo-hexagonal habit. Ikranite appears as translucent and ranges in color from yellow to a brownish yellow. This mineral ranks a 5 on Mohs Scale of Hardness, though it is considered brittle, exhibiting conchoidal fracture when broken.

Ikranite was first discovered on Mount Karnasurt (Kola Peninsula) in an agpaitic pegmatite, in the form of 1–2 cm grains. It is commonly associated with microcline, nepheline, lorenzenite, murmanite, lamprophyllite, and arfvedsonite. Tetranatrolite, and halloysite can also be found with it, though they occur at a later stage.