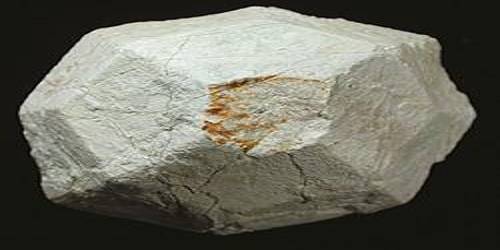 Illite is a non-expanding clay crystalline mineral. It is a group of mica-type clay minerals widely distributed in marine shales and related sediments. The chemical formula is given as (K, H3O) (Al, Mg, Fe)2(Si, Al)4O10[(OH)2, (H2O)], but there is considerable ion (isomorphic) substitution. It contains more water and less potassium than true micas, but it has a micalike sheet structure and is poorly crystallized.

Illite was first described for occurrences in the Maquoketa shale in Calhoun County, Illinois, US, in 1937. The name was derived from its type location in Illinois.

Illite is also called hydromica or hydromuscovite. Brammallite is a sodium-rich analogue. Avalite is a chromium bearing variety which has been described from Mt. Avala, Belgrade, Serbia. Illite is a secondary mineral precipitate phyllosilicate or layered alumino-silicate. Its structure is a 2:1 clay of silica tetrahedron – alumina octahedron – silica tetrahedron layers. The space between individual clay crystals is occupied by poorly hydrated potassium cations which are responsible for the absence of swelling. Structurally, illite is quite similar to muscovite with slightly more silicon, magnesium, iron, and water and slightly less tetrahedral aluminum and interlayer potassium.

It occurs as aggregates of small monoclinic grey to white crystals. Due to the small size, positive identification usually requires x-ray diffraction or SEM-EDS (automated mineralogy) analysis. Illite occurs as an altered product of muscovite and feldspar in weathering and hydrothermal environments; it may be a component of sericite. It is common in sediments, soils, and argillaceous sedimentary rocks as well as in some low-grade metamorphic rocks. The iron-rich member of the illite group, glauconite, in sediments can be differentiated by x-ray analysis.