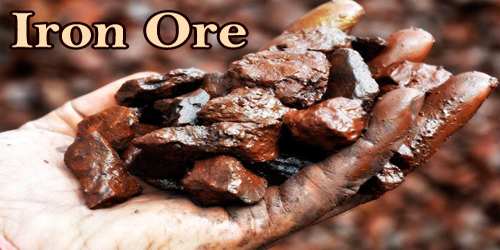 Iron ores are minerals and rocks from which it is possible to extract metallic iron and their deposits are contained in sedimentary rocks. The ores are typically rich in iron oxides and range from dark grey, bright yellow, or deep purple to rusty red in color. In these deposits, iron oxides are the two most common minerals: hematite (Fe2O3) and magnetite (Fe3O4). Typically, iron is discovered in the form of magnetite (Fe3O4, 72.4% Fe), hematite (Fe2O3, 69.9% Fe), goethite (FeO(OH), 62.9% Fe), limonite (FeO(OH)•n(H2O), 55% Fe) or siderite (FeCO3, 48.2% Fe).

There are four main types of deposits of iron ore: massive, most commonly mined hematite, magnetite, titanomagnetite, and pisolitic ironstone. Ores containing very high hematite or magnetite amounts (greater than about 60 percent iron) are referred to as “normal ore” or “direct shipping ore,” meaning that they can be fed directly into blast furnaces that produce iron. Almost every iron and steel item we use today, from paper clips to cars to steel beams in skyscrapers, has been mined to manufacture these iron ores. Ultimately, the origin of iron can be traced to star formation by nuclear fusion, and much of the iron is assumed to have formed as supernovae in dying stars that are massive enough to collapse or explode. 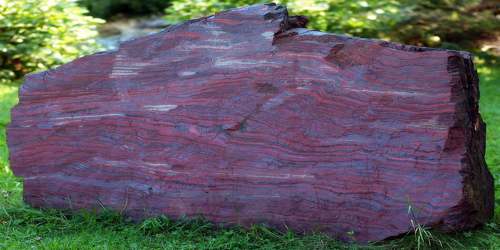 Almost all of the big iron ore deposits on Earth are found in rocks that formed over 1.8 billion years ago. The Earth’s oceans at that time had plenty of dissolved iron and almost no dissolved oxygen. Although iron is the fourth most abundant element in the crust of the Earth, comprising around 5 percent, the vast majority is bound in silicate or carbonate minerals more rarely. The deposits of iron ore started to develop when oxygen was released into the waters by the first species capable of photosynthesis. The thermodynamic barriers to removing pure iron from these minerals are formidable and energy-intensive, so comparatively rarer iron oxide minerals, especially hematite, are utilized by all sources of iron used by human industry.

In many of the rocks and the deep red sands of the Australian deserts, iron is responsible for the red color and is the main ingredient in steelmaking. Most of the iron ore used by developed societies has traditionally been extracted from mainly hematite deposits with grades of about 70% Fe. These minerals are found in great abundance on the seafloor, forming what is now referred to as “banded iron formations.” The rocks are “banded” since the iron minerals are found with silica and occasionally shale in alternating bands. The banding may have resulted from seasonal variations in the behavior of species. 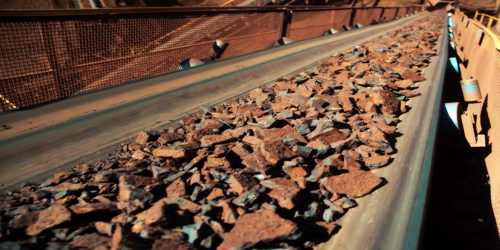 Iron ore is blended in a blast furnace with coke (from super-heated metallurgical coal). The furnace is injected with air that has been heated to about 1,200 degrees Celsius, producing a flame temperature of 2,000 degrees. This transforms the iron ore to slag and molten pig iron. Then, it eliminates impurities and adds alloying components. For use in finished goods, the steel is then cast, cooled, and rolled. The primary use of iron ore lies in iron manufacturing. To make steel, most of the iron produced is then used. 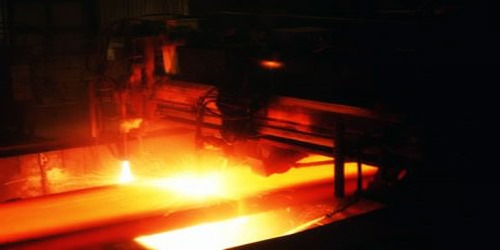 (Most iron ore is used to make steel)

Steel is used to construct vehicles, locomotives, and ships, beams used in homes, furniture, paper clips, and instruments, concrete reinforcement rods, bicycles, and thousands of other items. By both tonnage and purpose, it is the most-used metal. The average iron grade at which a magnetite-bearing banded iron formation becomes economical is approximately 25% iron, which can typically yield a magnetite recovery by weight of 33% to 40%, to produce a concentrate grading by weight in excess of 64% iron.