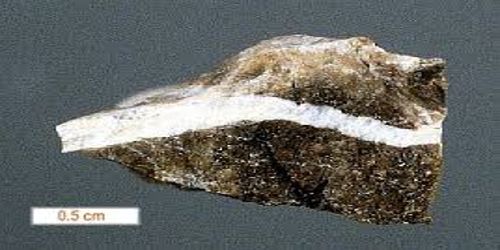 Jennite is a calcium silicate hydrate mineral of the general chemical formula: Ca9Si6O18(OH)6·8H2O. It is a triclinic-pinacoidal white mineral containing calcium, hydrogen, oxygen, and silicon.

The first specimen of jennite found in 1966 at the Crestmore quarries (Crestmore, Riverside County, California, US) was analyzed and identified as a new mineral by Carpenter in 1966 (Carpenter, 1966). They named it in honor of its discoverer: Clarence Marvin Jenni (1896–1973) director of the Geological Museum at the University of Missouri. The structure of jennite is made of three distinct modules: ribbons of edge-sharing calcium octahedra, silicate chains of wollastonite-type running along the b axis, and additional calcium octahedra on inversion centers.

Jennite occurs as an alteration mineral in metamorphosed limestone and skarn. It typically occurs as vein and open space fillings as a late mineral phase. It also occurs in hydrated cement paste.