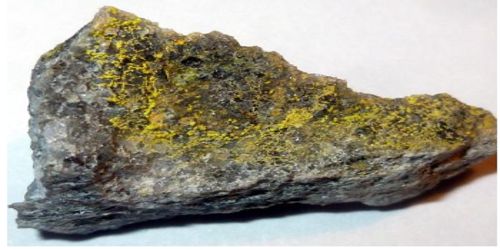 Johannite is a rare uranium sulfate mineral. It crystallizes in the triclinic crystal system with the chemical composition Cu[UO2(OH)SO4]2·8H2O. It is a mineral consisting of a green hydrous basic uranyl copper sulfate that occurs in massive form

Johannite was first described in 1830 by Wilhelm Karl Ritter von Haidinger. It was named for Archduke John of Austria (1782–1859), the founder of the Landesmuseum Joanneum (Styria, Austria). It crystallizes in the triclinic system and develops only small prism or thin to thick tabular crystals, usually occurs as flaky or spheroidal aggregates and efflorescent coatings. Its color is emerald-green to apple-green and its streak is pale green.

Occurrence – A rare secondary mineral in the oxidized portions of sulfide-bearing uraninite deposits, commonly of the post-mine formation.

Johannite forms as a secondary mineral by oxidation from uraninite as well as different other uranium minerals. It includes Argentina, Czech Republic, France, Gabon, Germany, Greece, Italy, Switzerland, United Kingdom, and the United States. The type locality is the “Elias Mine” in Jáchymov (Czech Republic).