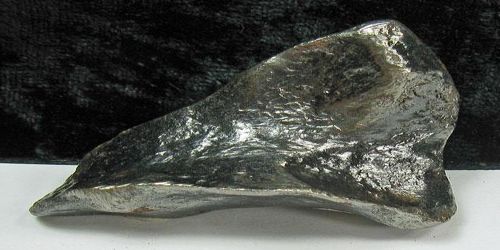 Kamacite is an alloy of iron and nickel, which is found on Earth only in meteorites. It is a mineral consisting of iron alloyed with 5–7 percent nickel by weight and found in almost all meteorites which contain nickel-iron metal. The name was coined in 1861 and is derived from the Greek root καμακ- “kamak” or κάμαξ “kamaks”, meaning vine-pole. Fig: Kamacite – an alloy of iron and nickel

The mineral has a metallic luster, is gray and has no clear cleavage although its crystal structure is isometric-hexoctahedral. Its density is about 8 g/cm3 and its hardness is 4 on the Mohs scale. It is also sometimes called balkeneisen.

Occurrence – A major constituent of iron meteorites (siderites) and present in varying amounts in most other meteorites except certain of the stony meteorites (aerolites). It is a mineral consisting of a nickel-iron alloy forming with taenite the mass of most meteoric iron.

At times kamacite can be found so closely intermixed with taenite that it is difficult to distinguish them visually, forming plessite. The largest documented kamacite crystal measured 92×54×23 cm (36.2×21.3×9.1 in).