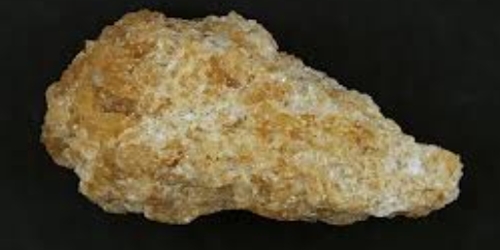 Kanoite crystallizes in the monoclinic crystal system. As kanoite is birefringent, it is also anisotropic. In an anisotropic mineral, the velocity of light differs as the direction of the crystal changes. It has a glassy luster with a light brown streak. The density of kanoite is 3.66 g/cm3 with a hardness of 6-7 – between orthoclase-quartz.

Kanoite can be found in the seam cutting of a pyroxmangite-cummingtonite metamorphic rock.  It is a rare mineral which was found in Tatehira mine, Kumaishi, Oshima Peninsula, Hokkaido, Japan in 1977. In the type locality, kanoite occurs along a joint that cuts a pyroxmangite-cummingtonite metamorphic rock in a manganese ore deposit.

The region has undergone contact metamorphism as magma intruded the area. It was named to honor Hiroshi Kano, a petrology professor at Akita University in Japan. It has also been reported from Broken Hill, New South Wales, Australia, the Semail Ophiolite in Oman, and the Balmat–Edwards zinc district, Saint Lawrence County, New York.