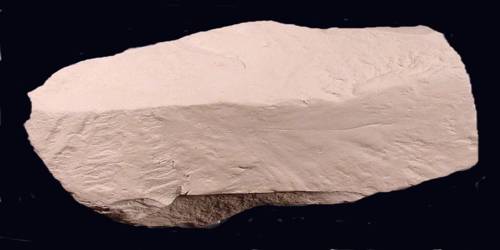 Kaolinite is a clay mineral, part of the group of industrial minerals, with the chemical composition Al2Si2O5(OH)4. It is a layered silicate clay mineral which forms from the chemical weathering of feldspar or other aluminum silicate minerals. It is a layered silicate mineral, with one tetrahedral sheet of silica (SiO4) linked through oxygen atoms to one octahedral sheet of alumina (AlO6) octahedra.

Kaolinite, which is named for its type locality, Kao-Ling, Jiangxi, China; is a common phyllosilicate mineral. It lends its name to the Kaolinite Group, members of which also belong to the larger general group known as the Clays. Kaolinite is a soft, earthy, usually white, mineral, produced by the chemical weathering of aluminum silicate minerals like feldspar. In many parts of the world, it is colored pink-orange-red by iron oxide, giving it a distinct rust hue. Lighter concentrations yield white, yellow, or light orange colors.

Kaolinite is one of the most common minerals; it is mined, as kaolin, in Malaysia, Pakistan, Vietnam, Brazil, Bulgaria, France, United Kingdom, Iran, Germany, India, Australia, Korea, the People’s Republic of China, the Czech Republic, Spain, South Africa, and the United States.

Mantles of kaolinitic saprolite are common in Western and Northern Europe. The ages of these mantles are Mesozoic to Early Cenozoic. Kaolinite clay occurs in abundance in soils that have formed from the chemical weathering of rocks in hot, moist climates—for example in tropical rainforest areas.