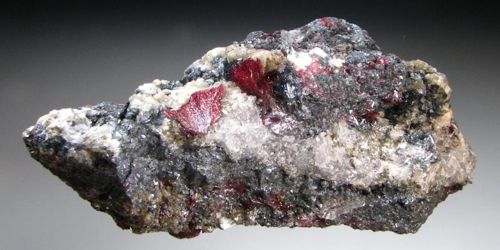 Kermesite or antimony oxysulfide is also known as red antimony (Sb2S2O). It is an unusual sulfide mineral. The mineral’s color ranges from cherry red to a dark red to a black. It is the result of partial oxidation between stibnite (Sb2S3) and other antimony oxides such as valentinite (Sb2O3] or stibiconite [Sb3O6(OH)]. Under certain conditions with oxygenated fluids, the transformation of all sulfur to oxygen would occur but kermesite occurs when that transformation is halted.

Kermesite is named after a formerly used red dye, kermes (dye), and was so named because of the grainy reddish color the mineral often has. The name dates from 1832. Earlier in English (17th and 18th centuries), certain antimony compounds were called “kermes mineral” for the same reason. Kermesite is the mineral state for Kermes mineral which was used extensively in the medical field for centuries. Because of its color, the precipitate of kermesite was used as a coloring agent and in alchemy. Because of alchemy’s focus on material transformation as evidenced by color, red antimony was used to produce the red state.

Kermesite is uncommon, but a widespread mineral that can be found in localities in Germany, the Czech Republic, Slovakia, France, Italy, Russia, Bolivia, Australia, Zimbabwe, Mexico, Canada, and others. It occurs as an alteration of stibnite in antimony deposits.

Presently, kermesite is collected for the beauty of its crystal metallic structure and not used in either cosmetics or the medical field any longer due to the toxic effects that it shares with antimony; less harmful substitutes have been found using both organic and pharmaceutical production.