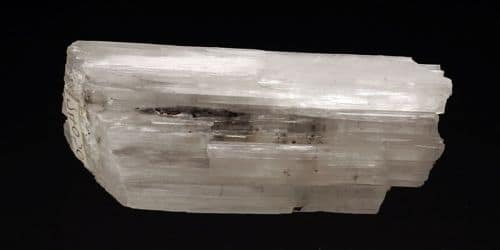 Kernite, also known as rasorite is a hydrated sodium borate hydroxide mineral with formula Na2B4O6(OH)2·3H2O. It is a colorless to white mineral crystallizing in the monoclinic crystal system typically occurring as prismatic to acicular crystals or granular masses. Kernite could be considered a metamorphic mineral as it is thought to form from the recrystallization of borax due to mild heat and pressure. Kernite is soluble in cold water and alters to tincalconite when it dehydrates. It undergoes a non-reversible alteration to meta kernite (Na2B4O7·5H2O) when heated to above 100 °C. It is relatively soft with the Mohs hardness of 2.5 to 3 and light with a specific gravity of 1.91. It exhibits perfect cleavage and a brittle fracture.

The mineral occurs in sedimentary evaporite deposits in arid regions.

Kernite was discovered in 1926 in eastern Kern County, in Southern California, and later renamed after the county. The location was the US Borax Mine at Boron in the western Mojave Desert. This type material is stored at Harvard University, Cambridge, Massachusetts, and the National Museum of Natural History, Washington, D.C.

The Kern County mine was the only known source of the mineral for a period of time. More recently, kernite is mined in Argentina and Turkey. The largest documented, single crystal is measured 2.44 x 0.9 x 0.9 m3 and weighed ~3.8 tons.

Kernite is used to produce borax which can be used in a variety of soaps.