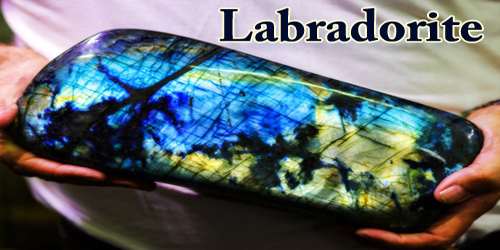 Labradorite ((Ca, Na)(Al, Si)4O8), is a feldspar mineral of the plagioclase series that is most often found in mafic igneous rocks such as basalt, gabbro, and norite. It is also found in anorthosite, an igneous rock in which labradorite can be the most abundant mineral.

It has an anorthite percentage (%An) of between 50 and 70. The specific gravity ranges from 2.68 to 2.72. The streak is white, like most silicates. The refractive index ranges from 1.559 to 1.573 and twinning is common. As with all plagioclase members, the crystal system is triclinic, and three directions of cleavage are present, two of which are nearly at right angles and are more obvious, being of good to perfect quality. (The third direction is poor.) It occurs as clear, white to gray, blocky to lath shaped grains in common mafic igneous rocks such as basalt and gabbro, as well as in anorthosites.

Some specimens of labradorite exhibit a schiller effect, which is a strong play of iridescent blue, green, red, orange, and yellow colors as shown in the photographs. Labradorite is so well known for these spectacular displays of color that the phenomenon is known as “labradorescence.” Specimens with the highest quality labradorescence are often selected for use as gemstones. 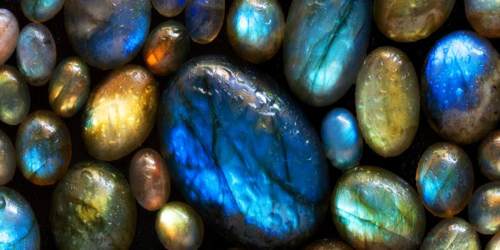 Occurrence and Properties of Labradorite –

Labradorite was discovered in Labrador, Canada, by Moravian missionaries in 1770 who named it for the area. It is, however, referenced in legends by older Inuit tribes, and was known to be in use by the Boethuk peoples of Newfoundland and Labrador. It became a popular gem in Europe in the eighteenth and nineteenth centuries. It has also been reported in Norway, Finland and various other locations worldwide, with notable distribution in Madagascar, China, Australia, Slovakia, and the USA.

Rarer varieties of Labradorite include Golden Labradorite, a transparent gold or champagne-color, and Spectrolite, an intense variety displaying the entire color spectrum, discovered in Finland in the 1940s. A significant amount of gray to black labradorite with good labradorescence is produced from locations in Madagascar and Russia. Small amounts of transparent labradorite with internal color flash are produced in India.

Labradorite can display an iridescent optical effect (or schiller) known as labradorescence.  The cause of this optical phenomenon is lamellar structure caused by an exsolution process due to a miscibility gap. The effect is visible when the lamellar separation is between 128 to 252 nm. The lamellae are not necessarily parallel, and the lamellar structure is found to lack long range order.

Labradorite is a mineral in the plagioclase series, and it shares many of the properties of plagioclase minerals. It has a Mohs hardness of about 6 to 6 1/2 and two distinct directions of cleavage that intersect at an angle of about 86 degrees or 94 degrees. Plagioclase minerals frequently exhibit twinning and striations on cleavage faces. 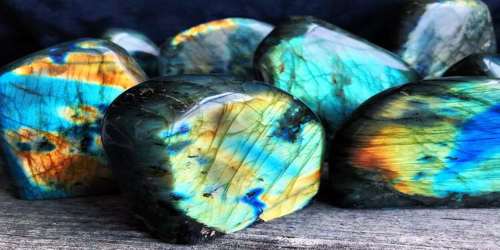 Uses and Benefits of Labradorite –

Labradorite has become a popular gemstone because of the unique iridescent play-of-color that many specimens exhibit. The quality, hue, and brilliance of the labradorescence varies from one specimen to another and within a single specimen. Stones with exceptional color are often given the name “spectrolite.”

Wearing or carrying Labradorite allows one’s innate magical powers to surface. It enhances the mental and intuitive abilities of clairvoyance, telepathy, prophecy and coincidence control, and assists in communication with higher guides and spirits in accessing Akashic records, psychic readings, and past-life recall. It provides an ease in moving between the worlds and permits a safe and grounded return to the present.

The Labradorite meaning is associated with shamanism, the ancient form of spirituality where healing is achieved in parallel planes of existence and different states of consciousness.

German writer and philosopher Johann Wolfgang von Goethe once said, “Magic is believing in yourself. If you can do that, you can make anything happen.” In other words, magic is more than pulling a rabbit out of a hat. It’s about finding your life purpose, which gives you a sense of meaning and makes everything even more illuminated in your universe.

Labradorite is rarely seen in mass-merchant jewelry. Instead, it is most often used by designers and jewelers who do unique and custom work. Many specimens of labradorite do not exhibit labradorescence. These materials can still produce beautiful gemstones because of their desirable color or other optical effects such as aventurescence. It also has a hardness of 6 on the Mohs scale. It will, therefore, scratch much more easily than diamonds, rubies, sapphires, and emeralds, and slightly more easily than jasper and agate.

As a workplace stone, Labradorite brings out the best in people, making work life more congenial. It encourages courtesy and full attention to the customer and assists part-time and temporary staff in becoming fully involved in a company.

Labradorite tempers the negative side of our personality, the traits and actions that rob our energy and may produce depression or shame. It assists in reducing anti-social, reckless or impulsive behavior in children, teenagers, and adults who are easily led into trouble by others and may aid in detoxifying the effects of tobacco, alcohol, and to a lesser degree, hard drugs. It helps develop the hands’ sensitivity, making it useful for physiotherapists and all who use the power of touch to heal.