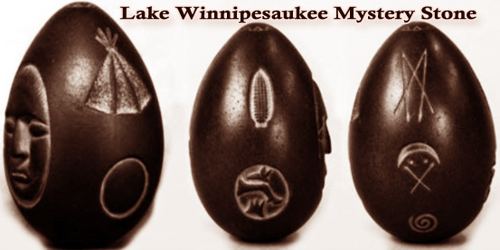 The mystery stone from Lake Winnipesaukee in New Hampshire is an alleged out-of-place artifact (OOPArt). The stone’s age, purpose, and origin are unknown.

In 1872 a couple of construction workers dug up a suspicious lump of clay near the shore of Lake Winnipesauke and discovered an artifact that today is known as “New England’s Mystery Stone”, sometimes also called “Lake Winnipesaukee mystery stone”. It has been impossible to verify the age of the stone and determine how it was carved. To make it even more interesting, the unknown creator decided to add a number of inscriptions and strange symbols, which are still open for interpretation.

The stone is about 4 inches (100 mm) long and 2.5 inches (64 mm) thick, dark and egg-shaped, bearing a variety of carved symbols. Carvings on one side of the stone show an ear of corn and several other figures. The other side is more abstract, featuring inverted arrows, a moon shape, some dots, and a spiral. A hole goes through the stone from top to bottom, seemingly bored from both ends with different size bits (1⁄8 inch (3.2 mm) at the top and 3⁄8 inch (9.5 mm) at the bottom).

Seneca Ladd, a Meredith businessman who hired the workers, was given credit for the discovery. In 1892, upon Ladd’s death, the stone passed to Frances Ladd Coe of Center Harbor, one of his daughters. In 1927, she donated the stone to the New Hampshire Historical Society. The stone is currently on exhibit at the Museum of New Hampshire History.

Besides its strange exterior and construction, the stone was also marked with bizarre symbols ranging deep into the abstract and evoking astronomical symbols along with a plain geometric egg-shaped face. A recent analysis suggested that it was a hoax and the hole through the stone was too precise to have been crafted by ancient peoples. Unfortunately, that position simply gave way to explanations including extraterrestrials and further muddled the debate.

A contemporary source suggested that the stone “commemorates a treaty between two tribes.” Another writer later suggested that it is a thunderstone. With the somewhat limited understanding of the day, the letter said that thunderstones “always present the appearance of having been machined or hand-worked: frequently they come from deep in the earth, embedded in lumps of clay, or even surrounded by solid rock or coral.”

Scratches in the lower bore suggest it was placed on a metal shaft and removed several times. Analysis has concluded the stone is a type of quartzite.