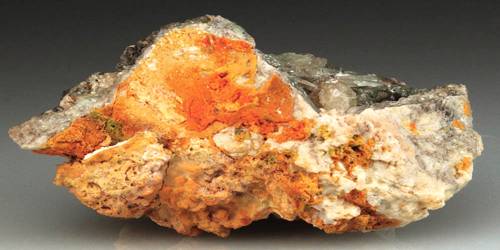 Lanarkite is a mineral, a form of lead sulfate with formula Pb2(SO4)O. It is a mineral consisting of sulphate of lead, occurring either massive or in long slender prisms, of a greenish white or gray color. It was originally found at Leadhills in the Scottish county of Lanarkshire, hence the name. It forms white or light green, acicular monoclinic prismatic crystals, usually microscopic in size. It is an oxidation product of Galena.

It is named after the type locality at the Susanna mine in the Leadhills in Lanarkshire, Scotland. An uncommon mineral that occurs in oxidized lead sulfide deposits. Lanarkite fluoresces yellow under X-rays and long-wave ultraviolet light. It is a mineral consisting of a basic lead sulfate occurring massive or in monoclinic crystals. Classically formed bladed terminated crystals of Lanarkite measuring to 6mm are seen grown in from both sides of the specimen, associated with platy crystals of creamy-yellowish Leadhillite.

Localities include, additionally, England, Wales, Germany, Austria, France, Greece, Iran, South Africa, Australia, the USA, and Chile, among some others.