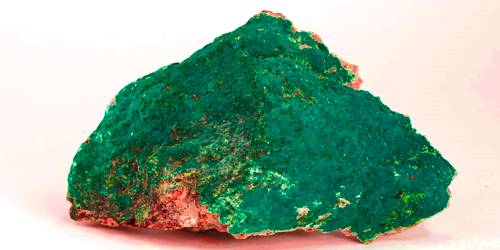 Langite is a rare hydrated copper sulfate mineral, with hydroxyl, found almost exclusively in druses of small crystals. It is a mineral [Cu4(SO4)(OH)6·2H2O] composed of a basic hydrous sulfate of copper. It is formed from the oxidation of copper sulfides and was first described in specimens from Cornwall, England. It is dimorphous with wroewolfeite. It is a secondary mineral dimorphous with wroewolfeite and typically found within oxidized copper-bearing veinstone within mine dumps and underground as flowstone on mine walls.

Langite was discovered in 1864 and named after the physicist and crystallographer Viktor von Lang (1838–1921), who was Professor of Physics at the University of Vienna, Austria. Langite is an uncommon but widespread secondary mineral in the oxidized zone of copper sulfide deposits, which may be of a post-mine formation. There are two type localities for langite, Fowey Consols, Tywardreath, Par Area, St Austell District, and St Just, St Just District, both in Cornwall, England.

Other reported occurrences include: