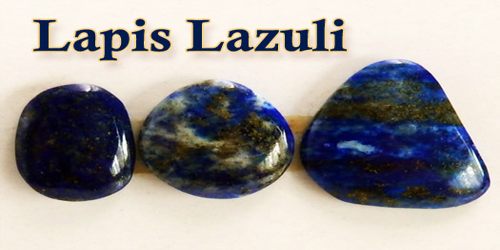 “Lapis Lazuli” (/ˈlæpɪs ˈlæzjʊli, -laɪ/), also known simply as “lapis,” is a blue metamorphic rock that has been used by people as a gemstone, sculpting material, pigment, and ornamental material for thousands of years. High-quality lapis lazuli can be a costly gem. The most desirable specimens have a rich, solid blue color and perhaps a few reflective pieces of gold pyrite. In addition to the sodalite minerals in lapis lazuli, small amounts of white calcite and of pyrite crystals are usually present. Diopside, amphibole, feldspar, mica, apatite, titanite (sphene), and zircon may also occur.

Lapis was highly valued by the Indus Valley Civilisation (3300-1900 BCE) and lapis beads have been found at Neolithic burials in Mehrgarh, the Caucasus, and as far away from Afghanistan as Mauritania. It was used in the funeral mask of Tutankhamun (1341-1323 BCE).

Unlike most other gem materials, lapis lazuli is not a mineral. Instead, it is a rock composed of multiple minerals. The blue color of lapis lazuli is mainly derived from the presence of lazurite, a blue silicate mineral of the sodalite group with a chemical composition of (Na,Ca)8(AlSiO4)6(S,Cl,SO4,OH)2.

As early as the 7th millennium BCE, lapis lazuli was mined in the Sar-i Sang mines, in Shortugai, and in other mines in Badakhshan province in northeast Afghanistan. By the end of the Middle Ages, lapis lazuli began to be exported to Europe, where it was ground into a powder and made into ultramarine, the finest and most expensive of all blue pigments. It was used by some of the most important artists of the Renaissance and Baroque, including Masaccio, Perugino, Titian, and Vermeer, and was often reserved for the clothing of the central figures of their paintings, especially the Virgin Mary.

The Lapis Lazuli crystal meaning is associated with the third eye chakra, the energy center that processes the essence of your inner spirit. When you wear the stone as jewelry or meditate with a single tumbled stone, you can channel the ancient Egyptians and their belief in its power to stimulate a connection to the spirit world. 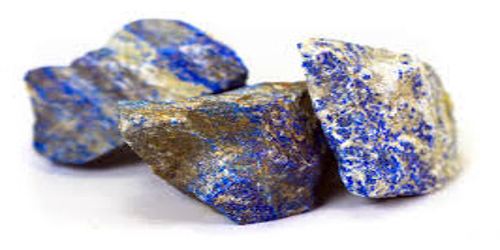 Occurrences and Properties of Lapis Lazuli –

Lapis is the Latin word for “stone” and lazulī is the genitive form of the Medieval Latin lazulum, which is taken from the Arabic لازورد lāzaward, itself from the Persian لاجورد lājevard, which is the name of the stone in Persian and also of a place where lapis lazuli was mined. Lazulum is etymologically related to the color blue and used as a root for the word for blue in several languages, including Spanish and Portuguese azul.

Lapis Lazuli usually occurs in crystalline limestones and is a product of contact metamorphism. The most important sources are the mines in Badakhshan, northeastern Afghanistan, and those near Ovalle, Chile, where it is usually pale rather than deep blue. Much of the material that is sold as lapis is an artificially colored jasper from Germany that shows colorless specks of clear, crystallized quartz and never the goldlike flecks of pyrite that are characteristic of lapis lazuli and have been compared with stars in the sky.

Lapis lazuli is found in limestone in the Kokcha River valley of Badakhshan province in northeastern Afghanistan, where the Sar-e-Sang mine deposits have been worked for more than 6,000 years. Afghanistan was the source of lapis for the ancient Egyptian and Mesopotamian civilizations, as well as the later Greeks and Romans. Ancient Egyptians obtained the material through trade with Aryans. During the height of the Indus Valley Civilisation, approximately 2000 BCE, the Harappan colony, now known as Shortugai, was established near the lapis mines.

In addition to lazurite, specimens of lapis lazuli usually contain calcite and pyrite. Sodalite, hauyne, wollastonite, afghanite, mica, dolomite, diopside, and a diversity of other minerals might also be present. To be called “lapis lazuli,” a rock must have a distinctly blue color and contain at least 25% blue lazurite.

Lapis lazuli usually occurs in crystalline marble as a result of contact metamorphism. The intense blue color is due to the presence of the trisulfur radical anion (S3−) in the crystal. An electronic excitation of one electron from the highest doubly filled molecular orbital (No. 24) into the lowest singly occupied orbital (No. 25) results in a very intense absorption line at λmax ~617 nm.

As a rock, lapis lazuli is composed of several minerals, each with its own hardness, cleavage/fracture characteristics, specific gravity, and color. Hardness ranges from a Mohs 3 for calcite to the 6.5 of pyrite. The hardness of the material depends upon where you test it.

Uses and Benefits of Lapis Lazuli –

Lapis lazuli appears in many Egyptian archaeological sites that date back to about 3000 BC. It was used in many ornamental objects and jewelry. Powdered lapis was used as a cosmetic and a pigment. Lapis lazuli started to be seen in Europe during the Middle Ages. It arrived in the form of jewelry, cutting rough, and finely ground pigment.

Lapis takes an excellent polish and can be made into jewelry, carvings, boxes, mosaics, ornaments, small statues, and vases. During the Renaissance, lapis was ground and processed to make the pigment ultramarine for use in frescoes and oil painting. Its usage as a pigment in oil paint largely ended during the early 19th century, when a chemically identical synthetic variety became available.

The Lapis Lazuli crystal stone is also connected to solar energy with its golden inclusions of Pyrite, which helps balance the solar plexus chakra and the third eye chakra. When these two energy centers are in harmony, it merges our personal desires with divine will. Integrating the Lapis Lazuli crystal stone meaning into our daily life will empower us to shine our light into the world with confidence and authenticity. In healing layouts, we advise placing a Lapis Lazuli stone on the third eye chakra, which is situated between the eyebrows. As people connect with its energy, begin to visualize a pure light flowing through their body and connecting people with their soul purpose. People also get the added benefit of its soothing energy-releasing tension in their lower forehead.

Today lapis lazuli is still used in jewelry and ornamental objects. As a pigment, it has been replaced with modern materials except by artists who strive to use historical methods. Lapis lazuli is commercially synthesized or simulated by the Gilson process, which is used to make artificial ultramarine and hydrous zinc phosphates. It may also be substituted by spinel or sodalite, or by dyed jasper or howlite.